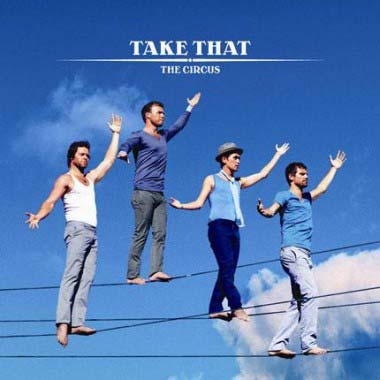 Take That, a band christened at the height of youth, their band name so punchy and cocksure that you couldn’t help but fall in love with these guys. There was the tiny midget one, the two window cleaners, Pavarotti, and, of course, the great American comedian, Robin Williams. They were fantastic, and for a while there, we thought we’d lost them for good. But no, they’ve returned to our hearts, leaner, more stubbly, and slightly thinning. They sound almost exactly like Coldplay. This cover, for their fifth studio album, finds the lads walking along what appears to be electric cables on a summers afternoon, perhaps in a field somewhere, or it could be by the side of a motorway. Either way, it’s totally irresponsible, made all the more insulting by Mark’s confusing outfit decisions – a vest and a scarf. How can it be warm enough for a vest, and yet cold enough for a scarf? Does he have the flu? And why choose the tightrope anyway? Clowns are much better. It has been argued that the tightrope is a clever metaphor for the delicate nature of a career in the limelight, where one slip and splat, you’re finished. They may have a point.

Below is our favourite song by Take That. Ironically sung by the one with serious speech issues.