This man, children, is very hip… 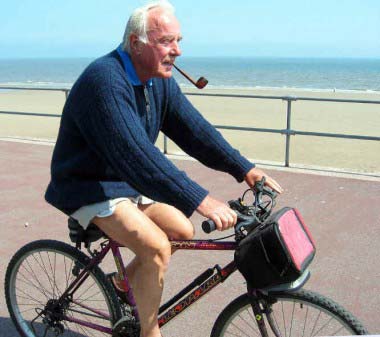 We do everything we can to keep up with the fashion crowds. Just last week, we strode around a warehouse in a neckscarf humming songs by a band we’ve just made up called Slutty Joes – what? You haven’t heard of them? How humiliating. The point being, we don’t know what’s going on, that’s why we stay as close as possible to the people who do. Thankfully, yesterday, our most luxurious fashion contact – a dandy called Oliver – gave us a confusing tip-off about what the stylish circles are doing for kicks. “For some reason, lots of trendies are buying fixed-gear bicycles,” he whispered into our silky ears, “I don’t get it.” For those yet to be associated with tight underpants and enormous glasses, fixed-gear bikes are the ones that only move when you’re peddling, completely taking away the sheer elation of coasting down a hill at magnificent speeds. Only a true idiot would buy one. “Also,” continued Oliver, “smoking cigarettes seems to be hip again, now that people are used to standing outside in gangs.” And with that, he took a pipe from his pocket, tapped it with his Zippo, and wandered off down a cobbled street, playfully kicking a stone.

Bikes and smoking, you heard it here first. Or, like, seventh.