One day, we will all be the same… 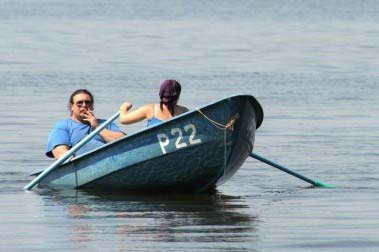 It’s always a pleasure to hear from one of the growing stock of Interestment contributors, and today magnificent observer of society, Emily, has turned her attention to the hot potato of sexual equality. She had this to say…

Saucy Golfer Henrik Stenson set pulses racing yesterday by stripping down to his bare essentials during the opening round of  the WGC-CA Championship. I think it had something to do with the ball going in the water or something, but frankly I was just gazing at his buttocks. And while many females in the public eye find it hard to keep their vestments on, it was a duly refreshing change to see a scantily clad man who isn’t Keith Chegwin or Atlas from Gladiators.

It made me think. Is there equality between the sexes?

No, but if there was it would look a little like this:

2. Blokes would wear skin-tight outfits and then feel insecure when builders didn’t notice them.

3. Teenage boys would stop and ask grannies for their number in the street.

4. Men would begrudgingly watch netball in the pub with their girlfriend and all her mates.

5. Pubescent boys who didn’t shave their armpits wouldn’t have any friends at school.

7. Girls would take three quarters of an hour to do a poo.

8. ITV would make a sitcom about two quite disappointing women (probably played by Caroline Quentin and Leslie Ash) which would later get a post-watershed slot on the BBC and go on to become one of their most successful shows ever.

9. Comediennes would not be judged on how ugly they are before they’ve even told a joke.

10. Your pervy Aunt would try it on with your 20-year-old brother’s mates.

One Response to Ten signs of sexual equality