No room for these heroes… 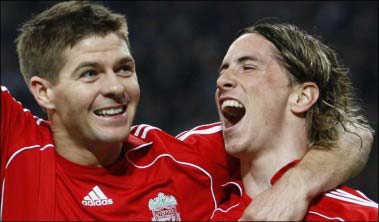 As ever, our terrific football expert Eliot has been casting a very intrigued eye over the weekend’s football. It’s great to hear from him again. He had this to say of his weekend’s 3-5-2…

Old Safe Hands himself, whose mitts appear to be slightly less secure when it comes to keeping hold of his women. Having split with first wife Sandra fifteen years ago, Seaman has now sacked it off with second hunch Debbie.

Seaman’s agent told the NOTW that his client was simply “bored” – a chivalrous and charming statement if ever there was one. Given the same paper sums up the ex-England keeper’s last few years as “indulging his hobbies of fly-fishing and golf and he also competed in ITV1’s hit Dancing on Ice show in 2006” the agent may wish to consider how secure his own position alongside Seaman is.

This in a nutshell is the problem for former keepers. Living in their own world throughout their playing days, they can’t turn their hand to management, general coaching gophery, or even punditry. So they are forced to walk out on their kids to alleviate the boredom. Mankind must find a cure to this potentially damaging social ill.

Of even more concern to the planet’s premier species, is that 36 people found the time on their Sunday afternoon to comment on a story involving the marriage of two people they have never met.

Continuing our theme of defenders scoring tremendous goals, Westermann banged in his ninth of the season as Schalke took the lead at Wolfsburg. But one of the many surprise packages of this season’s Bundesliga hit back and eventually won 4-3. There is no joke in this small paragraph; the Germans take their volleys most seriously.

Not Nemanja’s finest hour: at fault for the first goal, getting sent off for a cynical foul on Steven Gerrard, which itself resulted in Liverpool’s third, as they ran riot at Old Trafford. Vidic aside, the result proved Rafa Benitez once and for all as the Mark Zuckerberg of the Premier League; forever meddling unnecessarily, but eventually, after much dismay and complaint, it all seems to make sense.

Raymond as Gianluca Vialli calls him, features this week as the captain of the last team to win 4-1 at Old Trafford, when his QPR side romped home back on New Years Day 1992, in front of a gushing Elton Welsby. Hat-trickster in that match was Dennis Bailey who revealed after the match, ” I go to the Pentecostal in Brixton every Sunday when I reflect on the week just passed.” Whatever happened to religious top-flight footballers in Britain? Come on the new generation; lets invoke the Lord more often. QPR winning 4-1 at Manchester United does smack of a miracle after all.

We’re playing Rooney out wide (which he HATES) as punishment for naughtily telling the world that he hates Liverpool, comments that were hastily edited out of the Manchester United website from whence they came. Lord Fergie himself clarified claiming that Rooney didn’t mean hate; rather its just that the word dislike has fallen out of fashion amongst the nation’s youths. I blame Kelis – “I dislike you so much right now” would have sent a far better example to the listening youngsters on Merseyside.

This is a strange goal indeed in the Cavese vs Juve Stabia match. The ball disappears off the foot of Serie C dynamo Favasuli, comes down a few seconds later with some debris from Mars, and slap, nestles in the old onion bag. Incidentally, following this incident at the weekend, the Oxford Dictionary have replaced the current definition of the word hapless and replaced it with a picture of the Juve Stabia goalkeeper as the ball loops over him.

Nope – his inclusion last week wasn’t a mistake from the lazy editor. This remains interesting. Very interesting in fact.

A second Interestment XI appearance for the Catania man, as he scored another cracker at the weekend. Of more importance, this of course is also an opportunity to include those missed puns from last time, such as pointing out how made up Catania fans were, how it was one in the eye for the opposition Udinese, and how his goals are fast becoming the foundation of Catania’s successful fight against relegation.

For those still hunting Mourinho’s “best player in Europe” following his latent appearances against Manchester United in recent weeks, here is Zlatan Ibrahimovic doing what he does best; scoring astounding goals against mediocre teams in largely insignificant matches.