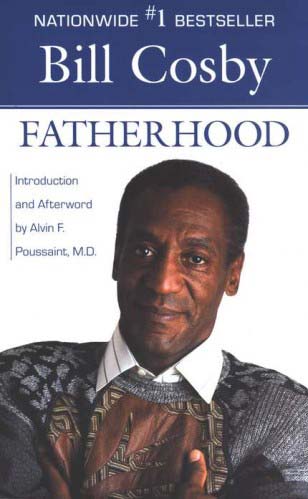 Should you remove your iPod headphones at any point during the morning commute, you will be certain to hear the sound of a hundred businessmen gently sobbing into their financial newspapers. They’re not really going to work, they’re just too damn scared to tell their wives that they haven’t had a job for the last two months. Instead, they head to one of the country’s many city parks to shout at pigeons and throw stones at ducks. As is the nature of the food chain, the ducks then pick on the mice, the mice abuse the beetles. Then, eventually, somewhere in the undergrowth an ant is kicking the hell out of an amoeba. It’s a cruel, harsh world. Which is why we go completely bananas when we hear about excellent bargains. Just this weekend, relative and friend, Matthew, had some fantastic news about a book of funny stories and anecdotes. “I found a copy of Fatherhood by Bill Cosby in a second hand shop,” he enthused. “It’s a brilliant brilliant book.” It indeed is. So come on, Matthew, how much for this hilarious find? “One whole penny.”