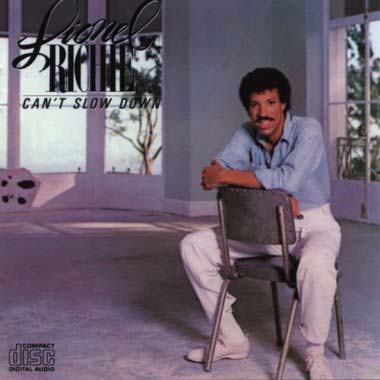 It must have been hard being Lionel Richie in the early 1980s – he’d gone from being a sax player/singer with The Commodores to becoming probably second only to Michael Jackson in terms of solo superstar status. It was presumably impossible to relax with the limelight glaring so hard into your face. And yet, to glance at his album covers would be to witness the face and body of a man content, happy with his lot. His first album – cleverly titled Lionel Richie – found him dressed down in his most casual sweater/chino combo, and then this one took his cool demenour all the way up to warp factor nine. Seemingly in an unfurnished mansion – possibly with an ocean view – Lionel has decided to thumb his nose at convention with a deft chair rotation, which finds him sitting backwards in his seat. Again, the outfit is casual beyond belief, as if he’s just returned from buying the papers and a croissant. If record sleeves could speak, this one is saying: “heeeeey, come on in, relax, let’s have a snog.”

Here’s the great man singing to the entire planet during the 1984 Olympics.