Young, dumb and full of… 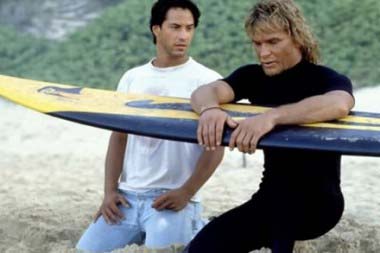 Such is the crippling nature of this recession that you shouldn’t be surprised to see your boss – once so suave, so classy – feverishly licking the insides of a discarded Pot Noodle, desperate for nourishment. And to think he used to satisfy his aggressive hunger with baked oysters and truffle mash. Such hard, worrying times. Which is why we scream hysterically and start clapping our hands whenever we hear of a great bargain. Just last night, good friend Jim was telling us over a pint of the warm stuff about a brilliant film he stumbled across. “New films just don’t seem to cut the mustard,” he slurred, weirdly, “but I found Point Break in the charity shop down the road! What a movie!” Jim’s right, it is an excellent film. For those who haven’t been carressed by Point Break‘s gentle beauty, it’s the tale of an FBI agent – stunningly played by Keanu Reeves – on the trail of some bank robbers, who may or may not be surfers. Patrick Swayze also stars as an ace surfer/modern philosopher called Bodhi, who says things like: “If you want the ultimate, you’ve got to be willing to pay the ultimate price”, and “they only live to get radical”. It’s completely brilliant. So come on, Jim, how much for this masterpiece of modern cinema? “One pound!”

One Response to Second hand bargain: An amazing film