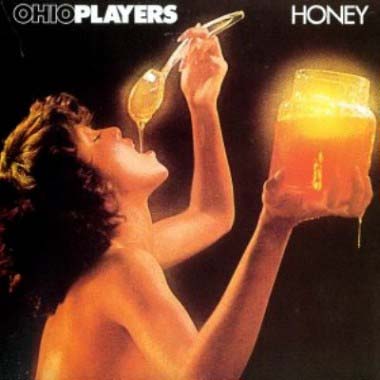 As funk bands go, the Ohio Players were great. Not wonderful or marvelous like James Brown, or The Meters. But they were a strong, tight group – they knew how to bring the funk. Their real strength, however, came with choosing album covers. While James Brown would always go for some kind of twisted self portrait, or The Meters pulled something relatively dire out of the bag, these guys knew how to make things seriously sexy. Previous albums Fire and Skin Tight had featured sensual pictures of foxy young women on the cover, then Honey upgraded the sexiness to fantastic levels. The lady in the picture is a Playboy playmate called Ester Cordet, and those lucky enough to own the record will know that it folds out to show her glorious bod in its entirety. The brief was simple: get a nice lady, and have her pouring honey on her face. The results: treeee-mendous.

Listen to a couple of their greatest cuts after the jump…