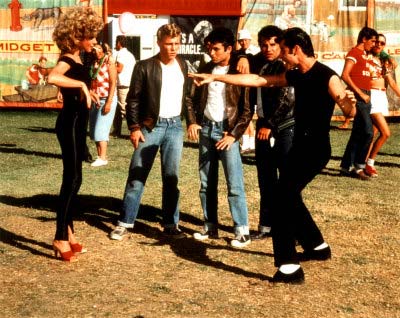 What a day it was when Aunty Margaret barged her way into the family lounge, massive surprise chocolate cake in one hand, Grease from the video shop in the other. This was going to be one birthday to remember. Only it didn’t quite work out so well. Two hours later, Grandma was on the floor, tears erupting from her eyes, wailing. Grandpa was attempting to calm her down, while the cousins trundled home on the bus in shocked silence. This so-called musical had destroyed all family values before our very eyes, making us question how mummies and daddies get together, and whether it’s actually okay to grope a woman’s bosoms when you’re at the cinema. Parents, you would be strongly advised to stop your children from ever watching this film. Here is what they would take away from it:

1. Should you meet someone on holiday – a charming young man with a bum for a chin, for example – he’s probably “the one”.

2. However, if he starts acting like a cock just because you’ve turned up at his high school unannounced, the best thing that you can do to win him back is to flirt with some of the quieter, kinder, more sensitive boys. Their feelings don’t matter.

3. If you do eventually get around to dating the guy you met on holiday, he might try to sexually abuse you at a drive-in cinema. You can, of course, react angrily at the time – so long as you forgive him eventually.  He’s just monkeying around!

4. Eventually, once you’ve realised that just being yourself is never going to make you attractive to men, morph into the most unappealing bitch you can imagine, squeeze into some trousers you stole from Russell Brand, and bosh! Girlfriend material.

5. It’s quite possible that once you get to secondary school, some of your classmates will look as old as John Travolta and Olivia Newton-John.