Album covers analysed: Oasis, Standing on the Shoulder of Giants

Band mistakes itself for God 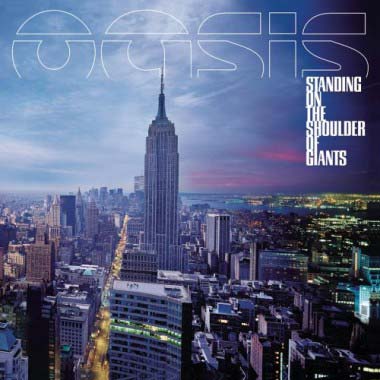 It’s no secret that a bit of success and celebrity can send a man bonkers. Will Smith appears to think of himself as Jesus, as does Tom Cruise, and for a short window in the late 90s and early 2000s, the bozos that made up Oasis were equally convinced of their own divinity. As album covers go, this one pretty much told the whole story. Their fourth, and probably most pompous, offering, it featured a Noel’s-eye-view looking over New York’s iconic cityscape, as if they were indeed kings of the world. The previous three records had found them, in order: sprawling in a luxury lounge (Definitely Maybe), strutting confidentally down a Soho street (… Morning Glory), and rockstar posturing outside a stately home (Be Here Now). One fears that had this album not brought them tumbling from the shoulders of giants, the next one would have featured them actually having dinner at God’s house.

Hear a cut from the album after the jump…