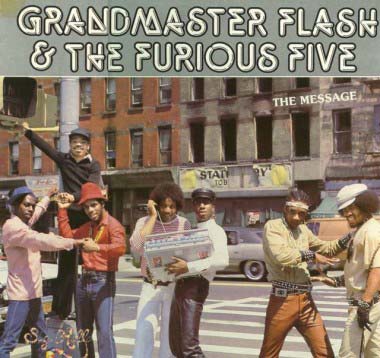 The strangest thing about having a photograph taken is that it never feels like a mistake at the time. You stand there proudly with an electric pink sweatband around your head, your new sneaks resplendent in the mid-morning sun, you feel a million dollars. Then ten years later you’re literally hurling yourself across a room in slow motion to prevent your bed partner from seeing the results. It’s a shame really. Especially for the band members of The Furious Five, who presumably refuse to mention this excellent record to anyone who didn’t buy it when it came out in 1982. The cover somehow features a seven-strong crew (The Furious SIX?) casually loitering on the pavement, some holding hands, others aggressively showing off their studded bracelets, tiaras, and leather trousers – the must-have macho street gear of the time. It’s a strong look. Although, in at least three cases, the outfits would now only be accepted in clubs for consenting adults. A brilliant, brilliant record.

Listen to one of the cuts after the jump…