Shouldn’t it be called Pretty Prostitute? 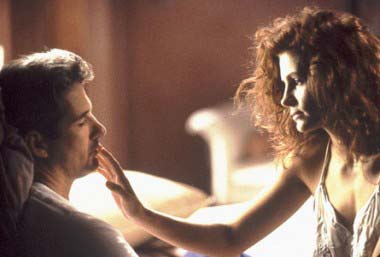 What an event it was when we first sat down as a family to watch Pretty Woman. Mum baked a cake, Nan made sure everyone had a piping hot cup of tea, and Grandpa arrived last with a bunch of tissues. This, he explained, was the latest Hollywood superhit, and supposed to be excellent. We huddled together excited. Only to witness two hours of a businessman screwing a prostitute and occasionally waving the floozy under his colleague’s noses like a total bastard. The cousins couldn’t sleep for a week afterwards, and it may not be linked, but eleven or so years later, Nan died. Here’s what innocent children would learn from their so-called “romantic comedy”:

1. If you’re a beautiful, bright young woman, become a prostitute.

2. Okay, now that you’re a whore, start getting excited, because a nice rich businessman will be just around the corner, looking for a wife. It could be you.

3. Should a man in a car ask you – obviously a prostitute – for directions, don’t just tell him, jump in and direct him from the passenger seat. If he doesn’t rape/kill you, he’s probably “the one”.

4. If you’re going to have unwanted meaningless sex with many many strangers, do everything except kiss them on the lips. That way you can still make your boyfriend feel special, even though your mouth smells funny, and you are absolutely crawling with disease.

7. It’s bad that women in posh shops freak out when bag ladies walk in perusing for clothes.