Hey, check out the grown up! 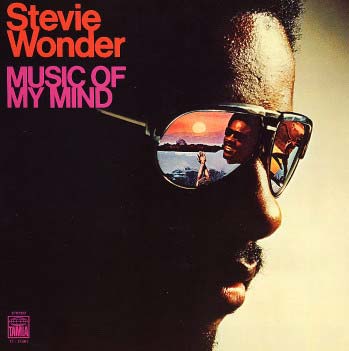 In the early 70s, Stevie Wonder – the funny little blind kid who could play one heck of a harmonica – suddenly went all moody and started playing robotronic instruments like synthesizers and electronic mouth organs. How did the cutesy foot stomping prodigy do it? Was he really a robot? No he wasn’t, he did it by demanding that Mr Motown and his goons take him seriously as “an artiste”. Hence, this was his first album with total creative control – or second if you count Where I’m Coming From (which we don’t) – and he marked it with an album cover so dour, so straight faced, that young kids have been copycatting the look for their Facebook profiles ever since. The pensive seriousness of his face suggests that this is the work of an adult – an actual adult who’s just grown a beard. While the smiling pictures in his mirrored shades hint towards a cheerier side – they’re saying, “don’t fret, kids, it’s still me – Little Stevie!” Either way, it was the great man’s first brilliant record. The first of many.

Enjoy a cut from the album after the jump…