Stars with work to do: Tom Cruise 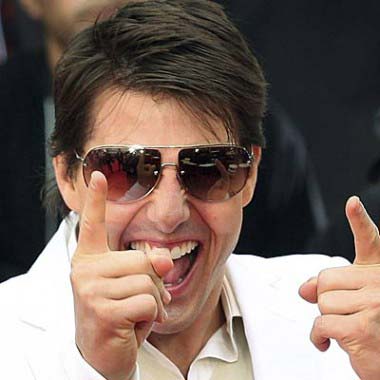 In the current global climate, it’s important that we all learn to love one another. After all, it’s only a matter of time before we’re all huddled in underground sewers, shoulder to shoulder, hungry and singing love songs to stay awake. Hence, we thought it high time to work on forgiving the public faces that have stirred such bile in the pits of our stomachs and – on occasion – made us actually shout at the television. The kind, innocent television. It didn’t deserve that. First up, Tom Cruise.

He is, of course, an easy target. Numerous po-faced critics have already done a good dismantling job on him, citing his ridiculous religious beliefs – aliens bombed a volcano, now we’re all lizards? – or his weird wife, who was excellent in Dawson’s Creek, but now looks dead behind the eyes. But, we haven’t got a problem with any of those things. We can’t like Tom Cruise because he’s so aggressively friendly. He looks like he’d shake your hand so hard that it would stay with you for at least an hour, and his smiles border on angry sneers. Just look at them, they’re terrifying – if you listen closely, you can almost hear him hyperventilating through his teeth, drops of spittle flying all over your bemused face. And God forbid you ever make him laugh, he’d probably hug you to death.

In short, Cruise, you need to calm down. Then we’ll be your friend.

One Response to Stars with work to do: Tom Cruise