He even swore when he lost, bless him 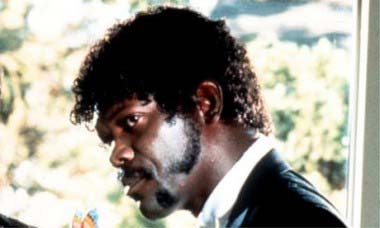 Much as we love him, Samuel L Jackson is not the most flexible actor we have ever seen. He can do the shouty shouty thing better than anyone else, and when he wants to play it cool, he’s very good at that too. Hence, when he snaffles the right part, he’s unbeatable. Three great Jackson performances include Do The Right Thing, Jungle Fever, and, of course, Pulp Fiction – the film that made him a bankable international star. He played Jules Winnfield, a tough hitman with a Soul Glow afro, and his monologue from Ezekiel 25:17 was so excellent that he looked a shoo-in for the Best Supporting Actor statuette in 1994. But no, it wasn’t to be. Instead, he lost out to Martin Landau’s over-the-top performance in Ed Wood – a film not even half as good. A shameful decision by the Academy. The actor demonstrated his disapproval by clearly saying “ahh, fuck” when the winner was announced. Good on him.

You probably know his Pulp Fiction act by heart, so why not take a second to enjoy his equally impressive Jungle Fever performance after the jump…