Robbed at The Oscars: Goodfellas 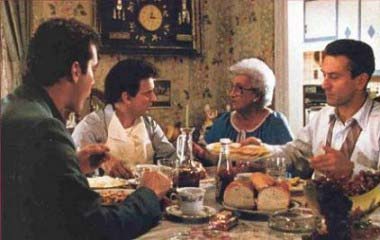 What a great time January is at the pictures. It’s when all of the serious, po-faced, Oscar contenders are dusted down and wheeled out, so that important men in half-moon spectacles can judge whether they’re socially conscious enough or not. This also means that studios like to unleash their most childish screwball comedies at the same time, for those who can’t take watching Kate Winslet pretending to be a Nazi, or Benicio Del Toro mutely embarking on a revolution – this year, cheaper thrills include Sex Drive, and Role Models.

Unfortunately, it’s also the time of year when the Academy can get it all embarrassingly wrong, so in the run up to The Oscars, we’ll be occasionally prodding a fat sweaty finger into the mix to complain about their past mistakes. First up, 1990.

The line up for Best Film was pretty strong – Awakenings (schmaltz from De Niro and Robin Williams), Ghost (schmaltz from Swayze and Moore), The Godfather Part III (worst gangster film ever), Goodfellas (best gangster film ever), and Dances With Wolves (indulgent Kevin Costner vehicle). It went to Costner, ridiculously – his journey of self-discovery set to the backdrop of the Wild West outdoing Scorcese’s masterpiece. It was an abysmal decision, which should have been made by simply investigating the trailers.

In 1864 a man went looking for America… and found himself

Only one winner. Enjoy the trailers below.