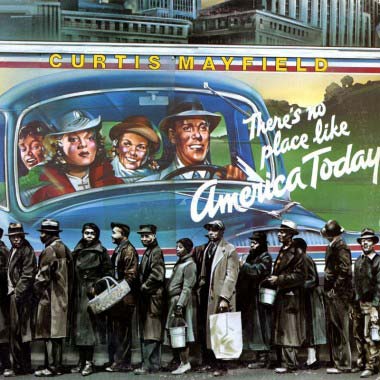 1975 was a great year for mainstream US rock music – Bruce Springsteen released Born To Run, Aerosmith gave the world Toys In The Attic. It was also the year that David Bowie made his best record, Young Americans. In amongst all the greats, as well, is this cracker from probably the most overtly political soul star of the time, Curtis Mayfield. The cover is a challenging stab at the American Dream, as a happy family cheerfully take a Sunday afternoon countryside drive on the billboard at top half of the sleeve. Yet the bottom half shows a much bleaker, terrifying vision of the US, as inner city residents make up a dole queue – or Welfare if you want to get all American about it – trundling alongside the massive billboard, challenging its message, saying something along the lines of “Shucks, are you KIDDING me!”. The title itself is proof enough that our stateside buddies probably do understand irony after all. A startling image, and a terrific record. In amongst the hardline political songs is the below gem –  even during the tough times, people need to get laid, he’s saying.