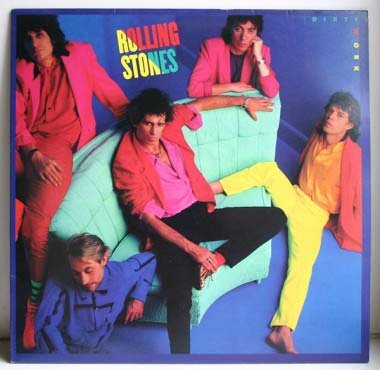 For all that was completely brilliant about the 1980s, they were an awful time for bands formed in the 1960s. Jefferson Airplane had morphed into Starship, who were preposterous, The Who disappeared up their own bums, and The Rolling Stones should have been crucified for this. The album sounds great on paper – they were collaborating with Bobby Womack, Tom Waits and Jimmy Page – but unfortunately Mick Jagger was too busy thinking about his solo career to make an effort, and Charlie Watts was reportedly going through a pretty enormous heroin phase and could barely drum. All these things are forgivable of a rock band, especially such a great one, but unfortunately, the artwork on the cover just adds insult to injury. Falling into the old trap of attempting to appear current, they opted for the garish colours of the time (1986), which, combined with their craggy drug ridden faces, gives them the look of aging male prostitutes. By all accounts, such magnificent colours should be uplifting and fun, but instead it’s completely depressing. Akin to watching your grandfather trying to rap.

Enjoy one of the singles from the album after the jump…