Sometimes it’s the rank food that tastes the best 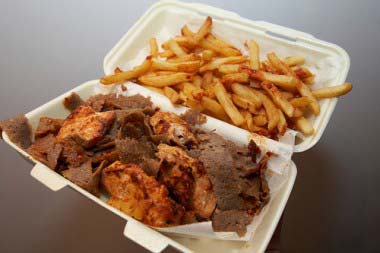 We’ve all been there – you’re smashed, it’s 2am, you need food, and you need it fast. If you don’t get it, you could faint. Unfortunately, your voice is refusing to form sentences that make sense, and a small tutting kebab shop crowd is gathering behind you, eager to fuel up, get home, and have some frantic sex with a stranger. These are pressure cooker conditions, and decisions have to be made fast. In this instance, we found ourselves swaying in front of an impatient shop owner with bills to pay, so barked the first thing we could make out from the counter dispay menu. It just so happened to be “meat and chips”. That’s right. Meat. And chips. No salad, no pitta. Just meat. With chips. A hush descended on the shop, and even the fattest, most grotesque donner kebab regulars looked on in utter disgust. Did we have absolutely no respect for our insides? The man doled it out with a look of suspicion, and was still looking us square in the eye as he spattered our meat with chilli sauce. We left the shop red faced and ashamed. But, guess what, doubters – meat and chips is probably the best late night meal ever. A bit like a poor man’s Shepherds Pie. In fact, it’s going to be on the Interestment party menu at every function between now and March/April. Then it’s picnic season.