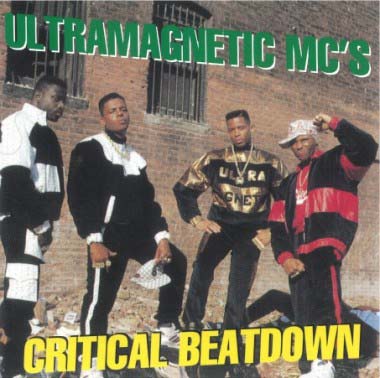 Once again, our favourite album cover analyst, Hip Hop Sam, is here to talk us through one of rap’s finest:

“This 1988 classic album explores the theme of sportswear versus urban decay. Moe Love and TR Love are wearing stylish matching white tracksuits, whilst Kool Keith and Ced Gee are sporting much glitzier, sexier outfits. Ced is wearing a homemade gold tracksuit, whilst Keith is wearing a delicious red tracksuit, which he’s accessorised with a Budweiser baseball cap – that signifies his love of ale and good times. It’s of particular interest that they’re standing over bodies lying in rubble, who we imagine are some wack MCs that they’ve recently defeated in an eventful rap battle. Good job, Ultramagnetics!”

Nice one, Hip Hop Sam. Hear some of the album after the jump…