Children, look away, ignore the creature… 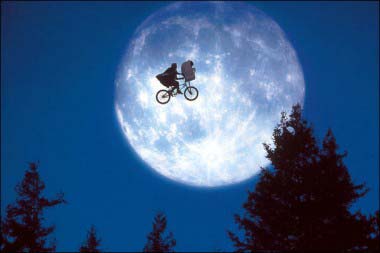 Be honest, none of us really know what ET was up to. He played a great hand, befriending some bored kids and manipulating them with his magic finger and weird croaky voice, but once back on his spaceship, he probably had a backslapping guffaw with his other alien mates about what a bunch of idiots that Elliott kid and his douchebag friends were. He introduced Drew Barrymore to cocaine.

So, next time you’re sitting cross legged watching ET with a bunch of children, be sure to spend the film vocally pointing out its flaws – eg “Bikes can’t fly!”. It might slightly ruin the experience, but at least your child won’t grow up casually making friends with tramps and hiding them in the wardrobe.

Here’s what your child would learn from Elliott and friends:

1. If you happen across a monster, do not tell an adult.

2. In fact, invite it into your home.

3. Allow your younger sibling alone time with the beast.

4. Provide the animal with a full fridge of treats and beers.

5. If the authorities sensibly attempt to quarantine the space monster, howl at the top of your voice, and/or feign illness.

6. If the cops come looking for you, run.

8. There’s nothing wrong with becoming emotionally attached to a hobo.

This also applies to Stig of The Dump.

2 Responses to Movies setting a bad example No2: ET