Including this work of absolute gene 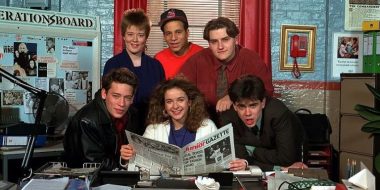 So the results are in, nothing has been counted nor verified, and you can now enjoy the last 25 TV shows making up our list of the best ever. You now have permission to go berserk because Hollyoaks didn’t make it, and neither did the news.

Blockbusters – way before geeks officially inherited the earth, these giganto-nerds were turning themselves into playground legends.

Twin Peaks – Bob crawling over the sofa towards you, cherry pie, a dinner party soundtrack. It had it all!

First Dates – once you’ve made it past the twenty-minute intro and Fred’s cereal box philosophy about how being in love feels nice, there’s an excellent TV show to watch.

Gogglebox – remains a better barometer for public opinion than any newspaper.

TFI Friday – Everything the late 90s was about. Chris Evans running a pub, Ocean Colour Scene noodling, the name Will somehow being turned into a catchphrase.

The Wonder Years – an old man looks back on his suburban childhood in 1960s America, it’s basically a much nicer Born on the Fourth of July.

Louie – Louis CK’s sitcom, and yet another decent stab at modernising Woody Allen. Again we ask, can you separate the art from the artist? Again we say yes, of fucking course you can. Else we’d barely be allowed to listen to music.

30 Rock – a TV show about a TV show, created by someone who worked on a TV show. Write what you know, that’s the message.

Faking It – the ultimate underdog story – normal folk attempt to pass themselves off as something to write home about, while conclusively proving that a life of riches and success is really all down to blagging.

Wogan – the closest the UK has come to a decent talk show. In America they’ve got these things coming out of their gigantic weeners.

Flight of the Concords – the first real glimpse into the jumbo-gentrified world of hipster New York, pre-dating Girls, Broad City, Master of None, High Maintenance and the rest. Also very funny.

Press Gang – from a time when print publishing actually meant something, these pint-sized hacks were out there making a difference. Paul Reynolds, who played Colin, has since gone on to play FOUR different characters on Casualty. A diverse, and seemingly very forgettable, actor.

Grange Hill – the TV show that taught me to say NO to drugs, and guess what? I’ve barely taken heroin since.

Wacky Races – only 17 episodes were made which makes this the Fawlty Towers of excellent 1960s cartoons.

Girls – Lena Dunham is forever caught in the swirl of an impending backlash, which seems genuinely unfair – Girls was pretty much a work of genius.

Shooting Stars – as synonymous with 90s culture as a beautiful lady barfing off a pier.

Going Live – two words: Trevor and Simon. Some of you might have noticed that that was technically three words. Good for you.

Gladiators – how will Keep Fit enthusiast Kevin fare against Shadow who is full of steroids and cocaine?

Would Like to Meet – profusely sweaty people on dates force eye contact and pretend to be listening while secretly pressing a panic button under the table.

Queer Eye – four gay men help floundering heteros to understand what modern masculinity is all about. Another one teaches them to chop avocados.

Battle of the Planets – word has it the original version was full of sex and sweary fuck words until the censors cleaned it up for kids. The rest is anime history.

Popstars: The Rivals – anyone still shocked by Brexit clearly can’t remember Javine not getting into Girls Aloud.

I’ve been a dad-of-two for eight months here’s what I know
Interestment’s 100 Greatest TV Shows of All Time, 1-100