Look at them, all bloody cheerful 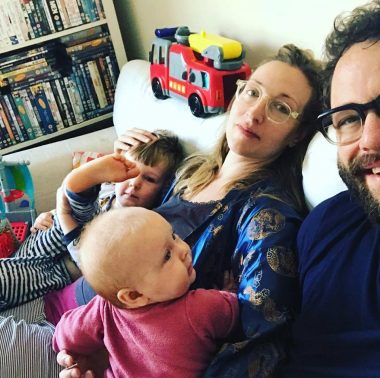 I’m a walking reminder of a clumsy childhood. My nose doesn’t work properly, both knees are fucked, I have four scars on my hands, and two more on my face. One’s a permanent blemish on my cheek from when I was hit by a bike, the other’s a dent in my forehead from when I collided with a nail. I’ve been stitched up and cobbled back together so many times I don’t even know who I am anymore. Point being, you’d think anything dredged up from the same gene pool as me would be on first name terms with A&E by now, yet it took us a whopping three and a half years to get there, and when we did it wasn’t even because our lad had stacked it for no apparent reason (one of my signature moves), but because he’d had an allergic reaction to something and ended up looking like he’d done ten rounds with Tyson.

His face puffed up like a balloon, his left eye closed completely, while the right one battled valiantly to stay with us. In the face of such adversity, my role as a father is obviously to step in and calm the situation down, to locate my inner stoicism and to do some rational decision making. What actually happened was that I fell to pieces. I saw my lad’s strange Elephant Man face and started distractedly knocking things over, I began decisive sentences about what to do next before suddenly going silent, transfixed by his weird, gunky, closing eye. At one point, I think I started needlessly making cups of tea for everyone.

Thankfully, while I was in the grip of this emasculating whirlwind of panic and indecisiveness, my wife, the huntswoman, the lioness, literally the only member of our household that isn’t a massive baby, calmly arranged a visit to the hospital (for him, not me), booked an Uber to take them there, and within minutes the pair disappeared off to spend 24 hours in A&E – possibly as an homage to the television programme of the same name, I don’t know. Meanwhile I got to spend quality one-on-one time with my 8-month-old daughter.

So, what did I learn from all this? The most obvious lesson to take away from it is that I am not, contrary to what I’ve told many job interviewers, calm under pressure. I go to pot, crippled by what I can only assume is a surge of base prehistoric instinct that renders natural man useless at the sight of his first born turning into a blob fish. I short-circuit. I learned that spending extra time with my little girl is an absolute delight, that she exudes nothing other than pure joy for at least 70 per cent of her waking hours. I also learned that the job of a child is essentially to highlight your ineptitude, and to do it as often as possible. I see it when I’m trying to change extremely full nappies, or when I’m attempting to keep two children calm at the same time, or when my son asks me basic questions about the world that I can’t even remotely answer, or when I look at my bank balance and puke slightly into my mouth, or even when my daughter wakes up happy about the day ahead, because it makes me wonder if perhaps the cruel, infuriating world I live in is one of my own invention – a bit like that line in Paradise Lost about “making a heaven of hell and a hell of heaven”. I wonder if she’s secretly a genius and has read Milton. I see it when my son’s face swells up and he needs my help and I don’t know what to do.

And then I think that perhaps this timely reminder of my ineptitude is their gift to me, because fallibility is surely where basic humanity lives. It’s the thing that stops us getting ahead of ourselves and believing that we’re better than other people, and that we’ve somehow got life licked. Perhaps the fruits of my loins are here to remind me that none of us really know what the fuck we’re doing, and that you ultimately never really stop being vulnerable no matter how craggy-faced or overtly successful at life you become. Perhaps, I think to myself (now tempted to smoke a big cigarette to really get some serious pondering done – though I am no longer allowed to smoke, because of children etc), in the same way we give them life, they give it to us too, just in a more figurative sense – they arrive at a time when we’re possibly coasting and they amp up our emotions and force us to re-evaluate everything about the world around us. I wonder if that’s the great irony of parenthood, that it’s not just them who become children, but also you. Then, bang on cue, everyone does a massive shit.