I’ve been a Dad-of-Two for six months, here’s what I know 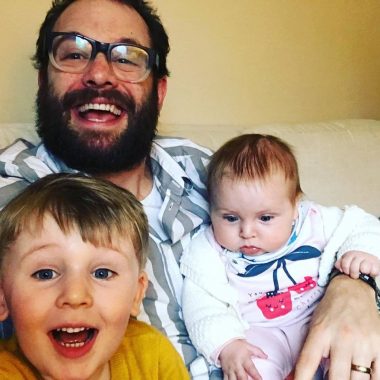 You have to do everything equally for your children – that’s what I’ve been told, and that’s why I’ve been doing these posts. Once a month I blogged for the first one, and thusly, thanks to our collective insistence that all things must be level, fair, and skewed towards a place where no one ever feels alienated, nor overlooked, nor unloved – and god forbid anyone ever feel offended – I am now doing precisely the same thing for the second. Else what kind of father would that make me? In the eyes of the law (by which I mean societal law, not law law), a bad one.

But here’s the thing. We’re not all the same. My neediness levels aren’t the same as yours, and whatever your sense of entitlement, it probably differs from mine. My second child mightn’t be remotely fussed whether I wrote about her or not, she might hate the way I write, or just find the whole thing a bit icky. Either way, if there’s even the faintest possibility that her feelings will be hurt, I’m paying the toll on that right now.

Oh, and here’s the other thing, I’m basically out of knowledge – yeah man. Seems whatever pearls I picked up when I first navigated this trail, that’s really all there was, because once you break parenthood down, it’s just the same big long conveyor belt of the mindless drudgery every single time. You don’t excavate further and find new things. They shit, sleep, cry, feed, they hit their markers, they cut teeth, they coo, at some point you give them food, they learn to walk, they learn to talk, and then they don’t shut up. The manner of how it happens is where the magic is, but that only matters if you’re emotionally invested, and no offence, but I’m not sure you are.

So, to summarise the last month or so: we’re making all the same checkpoints for the second time, nothing we do comes without real, actual déjà vu. Babies don’t style things out in their own signature way, they don’t put their little spin on it. At the moment, she is simply evolving at the usual rate expected from our cubblings, meaning, at some level, she is no different to every animal born in the wild, in a field, in a pond, in a hospital, in a tree, in a toilet, or in a stable. The only thing separating her from the rest is that I fucking adore her. I, specifically me, love her. She is, hands down, the greatest thing in the the world.

Which is why I can only apologise for not writing an update last month. Perhaps I’ll buy her a car one day to make up for it.

I’ve been a Dad-of-Two for Four Months, here’s what I know
It’s only been over a year, here’s Interestment podcast #47!