I’ve been a Dad-of-Two for Four Months, here’s what I know

That’ll be all four of us on a giant penguin 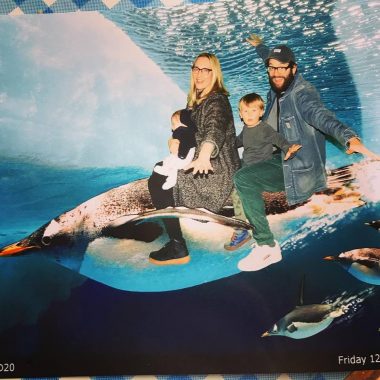 The number 3 trembles and shakes beneath the weight of its own gravitas. It’s complex and meaningful, and people won’t stop fucking going on about it. Three Wise Men, Three Shredded Wheat, Three Amigos, Three Musketeers, Three Tenors, The Three Stooges, The Three Degrees, Three Monkeys, Three Little Birds, The Good, The Bad, and The Ugly, Three Primary Colours (red, yellow, blue), Three Witches, Three Bears, Three Little Pigs, Three Blind Mice. You look at athletics, and it’s only the first three over the line that even get acknowledged, because after that, who gives a shit? – try remembering who came fourth and you’ll only ever be rewarded with dumb silence. Trilogies, Triumvirate, tricolour, the Holy Trinity.

Presumably being two sheets to the wind is fine, but being three means you’re all over the shop. If you talk about things like ‘love triangles’, or ‘three’s a crowd’ in social situations, these are basic human interactions made wildly complicated by the arrival of just one added element. Family as a concept doesn’t even exist when you’re a two, but becomes very real when you’re a three. When my small family first came into being (as a three), everything felt apocalyptic and cluttered, like a gigantic fly had crashed into the ointment, splashing it all over the place. There was literally ointment everywhere, both metaphorical, and actual ointment, used for soothing things. For months I could barely breathe, and even now I look back on those first days of parenthood, with my rictus grin, my baby in a backpack, and the whole thing seems lost in a snowstorm. I was there, I know I was because I’ve seen the vastly documented photographs (which I make no apology for), I was 33.3 per cent of this spluttering machine, but I can barely remember a bloody thing. Words being formed, teeth being cut, steps being taken, the time he transitioned, much like his father shortly before him, from nipple to bottle –  it all happened, but I was too busy splashing around in an ocean of early parental panic to really enjoy it.

Point being that those waves have settled and the sea seems so much calmer this time around. We’ve added to the brood, we’re a FOUR (and, fittingly, we’ve been that way for four months), and it turns out that four is lovely. Four is a square, it’s sturdy and makes sense. There’s no sharp, aggressive edge like on a triangle, no unpredictable angles. Everyone is happy, because in a four you don’t get spare parts, no third wheels. and you’ve got no choice but to always share the load. That’s why we talk about it with such optimism – The Fantastic Four, The Fab Four, The Four Tops, the Four Horsemen of the Apocalypse (okay, ignore that last one).

And who knows? Perhaps I’ll even form actual memories this time… in my actual brain.