How to be a better feminist if you’re a man

Good news, you don’t have to wear a t-shirt if you don’t want to 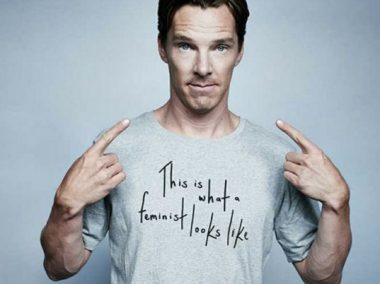 If you want to see the facial embodiment of a gigantic clanging sound, just say that you’re not sure about all this feminism malarkey at one of those dinner party things everyone has these days.

Hear the words drift from your mouth, sip your pint as they crash to the floor, then feel the blood drain from your face as you realise you’ve made an almighty social faux pas. You’ve spent the evening maligning Cosby, CK, Harvey Weinstein (whose father Walbert must be spinning in his grave), whoever, you made a hilarious quip about someone getting the 1972 Oscar for Sexiest Tits in a Motion Picture, but now you’ve officially lost the room and horrified your peers with your stupid thoughts and opinions.  With a sweaty forehead, you explain how the whole notion of feminism has become murky to you, how liking Broad City and not vomiting coffee when women get promoted just doesn’t seem to cut it any more. There must be more to it than that. Because that’s the thing about modern feminism, it’s everywhere. It’s loud, it’s brash, it’s a movement that forward-thinkers are expected to buy into wholesale. But sometimes you might find yourself feeling conflicted.

Take me as the most obvious example (because I’m writing this), on the one hand I wholeheartedly embrace what I see as fundamental feminist ideals – eg. seeing women as equals, having close female friends, not inflicting your surname on your wife, not sexually abusing or raping people, not belittling them verbally, nor slapping their sweet ass, basically going your entire life without making someone the victim of your abhorrent behaviour. I even attempt to achieve something close to mutual orgasmic glee when I’m doing it with a chick. But on the other hand, I have my issues with it. I secretly find men who declare themselves feminists to be cloying, as if they’re trying to score points (and possibly attempting to get femi-laid). I find women who brazenly call themselves feminists frustrating too, as if by announcing it of themselves, they’re stripping the label away from people who aren’t shouting as loudly as they are.

Add the fact that I buy into stereotypes about girls being hilariously bad at throwing, and that I’m prone to objectifying a terrific set of norks when I’m alone and the lighting is soft, and you can see why I’m a bit all over the place with this. For a middle class leftie in his early 40s this is a bloody nightmare – I should have a solid stance, but I don’t. I should have all of the facts, but I don’t. I should be able to express myself at dinner parties without completely misjudging the vibe, but I can’t. Hence, to extinguish my feelings of abject ignorance, I decided to get to the bottom of it once and for all.

I wanted to gain a crisper understanding of what modern feminism looks like, and how we, as men, can best approach it. But how would I do this? How would I get to the root of it? By asking women, you idiot.

“No more looking like a twat for me!” I thought. And, you know, it might really help humanity too.

QUESTION ONE – What is Feminism?

I started by putting the word out on Facebook and Twitter, asking my vast swathes of friends who identified strongly as feminists to reveal themselves. Their initial answers came from different areas of the spectrum in terms of vitriol, but the core message was the same for all. Interestingly, no men came forward.

“I think Feminism is the belief that everyone is entitled to the same rights, opportunities and to be afforded the same value as a human being, no matter what gender they identify as.”

“Feminism is the only thing I am sure of – that women should have equal treatment and opportunities as men, and that they still don’t.”

“Disappointingly, feminism is still a battle.”

“It’s not judging someone on different criteria because they’re male or female.”

“Feminism to me is about being conscious of inequalities towards women and misogyny that we have come to accept as normal life.”

“For me, feminism is more than just wanting equality, men are way ahead at the moment and I feel angry about it, I want women to one day not just be equals, but to be on top.”

“It means not being told I can’t do something because I’m female.”

“It’s not about hating men, it’s just a simple case of the same rules for all. We need to normalise equality.”

QUESTION TWO: How can men be better feminists?

I then moved onto the next part of my advanced study, which would involve using their answers to an open question about how men can better serve women to formulate a rudimentary list of rules for guys to follow to the letter. A kind of Ten Commandments for Male Feminists (only, in this case, there’s just eight of them). I was basically playing God. If she wasn’t a woman.

“It’s probably easier for men not to engage with feminism because at the moment it requires some effort,” says Blue Peter legend Janet Ellis, “but it took years of training to dissuade people from eating with their hands, but food tastes just as nice from a fork and it’s way less messy.”

“Feminism is human kindness about humankind. Don’t make decisions about who people are, or what they’re capable of being, based on their gender, it’s not nice. It’s thoughtless to criticise someone’s job, or make comments about their sense of humour, or belittle their choice of pet because they’re male or female. It seems equally rude to let gender restrict anyone’s choices or shape their futures.”

“I would say the majority of men are doing their best to get on board with feminism, to be supportive and to make the case for the fact that the patriarchy hurts them too!” says the writer Daisy Buchanan. “Every time they’re prepared to discuss toxic masculinity, or mental health, or how the idea of what a man is ‘supposed’ to be is very damaging, they are promoting the cause.”

“Whenever you examine or challenge the stereotypes men are expected to live up to, even if you personally are happy living up to them, you help,” says the writer Lauren Bravo. “You’re being a good feminist.”

“Men need to understand the value of being emotional,” says my friend Kate, “rather than perpetuating the idea that it’s a weakness – especially in the workplace.”

Listen to women, and believe them

“Men especially are socialised to show interest and expertise by talking as if you have all the answers,” says Daisy. “As women, the first thing we really want is to be listened to and heard. So let us tell you what is going on.”

“Believe women” says my friend Sarah. “Unfortunately, open-minded, caring friends often aren’t around when people are being talked over, publicly intimidated or harassed in the street. I would like people to listen to those with different experiences and trust them. Just because you don’t see it happening, it doesn’t mean it’s not real.”

“If you see a woman being harassed or catcalled in public and you want to confront it but you’re scared of being patronising or trying to fight her battles for her, talk to HER,” says Lauren. “Don’t leap into battle with the guy like you’re Scrappy Doo, but defer to her. Is she okay? Would she like some help?”

Spread the word, and speak out

“Talk to other men about feminism,” continues Lauren. “Join the fight, visibly, vocally.”

“I’d say a lot of guys I know personally are feminists, they just don’t realise they are, or feel comfortable admitting it,” says my former colleague Nicki, “because it can have a stigma.”

“One does encounter guys who say ‘hold on, I’ve never done anything so awful that millions of women have been compelled to march against me. Why is this my problem?’”, says Daisy. “So I would say the best, best thing you can do is to take action so positive that it drowns out the negative voices.”

“Don’t swear in front of us and then apologise,” says Daisy. “Women who are your pals probably use the worst words all the time, they’re not going to collapse onto a fainting couch because you’ve been effing and blinding.”

“Make a conscious effort to have women speak in meetings,” says my old friend Cath, “and don’t denigrate behaviour as ‘womanly’.”

“I like to think that the majority of men treat women as equals,” says Ally. “That they share the housework, they share the childcare, they share the big decisions, but I may just be being an optimist. Feminism has to come from men as well as women.”

“I had a discussion with a workmate once about how odd it was that a bloke shook everyone’s hand after a meeting apart from mine,” says Nicki, “and he stood up for him saying ‘oh he didn’t mean it!’ but being ‘just the way he is’ isn’t a valid reason for sexism to continue’.”

“Recognise – and we’re talking especially to white, straight, cisgender guys here –  that we start off life on an uneven playing field,” says Lauren. “And don’t expect a cookie or a medal for being a feminist. You’re not a superhero; you’re a feminist because if you weren’t, you’d be a sexist.”

“We can see you’re trying and that’s great,” agrees my pal Jenny, “but you’re not toddlers that deserve a treat because you only did a bit of a wee before you got to the potty unlike last time when you shit yourself. There’s work to do! We need to normalise equality.”

“Relinquishing power is not easy, even for the enlightened,” says Kate.

“A lot of sexist chat is disguised as ‘banter’,” says my friend Hannah. “And it’s very hard because we all need to have a sense of humour, but banter can also create social norms and dictate what language is used and where attitudes are formed.”

“Men can help by speaking up more when they see other men behaving badly towards women,” agrees my old boss Ally. “If they’re making a derogatory remark in the pub, objectifying women, expecting women to be ‘less’ in some way, call them out on it.”

“Don’t be scared to be a feminist, don’t be afraid of idiots judging you for it,” says Sarah-Daisy. “Remember, feminists don’t want to boil your cock and balls in front of you, we want to drink and laugh with you, to dance and sing with you, all day, errday!”