The Interestment 2016 Review of The Year

It’s been a helluva shitty year 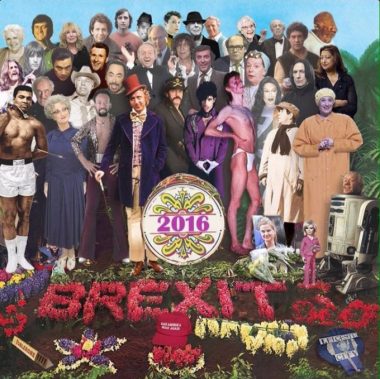 You don’t need me to tell you that 2016 has been a horrible year, people have been saying it since February. “Horrible year,” they’d said. “Yeah man” they’d agree. And they’re right, it has been horrible, it took some really nice people away and put some really dreadful people in their place, it was like someone was stabbing you right in the morale bit on a voodoo doll, or pulling a lever in a dank dungeon to maximise your sense of foreboding and ennui. That’s basically what it was like.

Of course, the most horrible aspect of 2016 is that it feels like the bullies have won, it’s been the year when all of the simmering hatred and rage, and jealousy and entitlement and racism and sexism and homophobia has unwittingly been given permission to bubble over. It was the year that our faith in human nature effectively died, but then again perhaps it was already dead and we just didn’t realise. 2016, if anything, may simply be the year that a gigantic mirror was placed in front of the planet and we realised that we’re less evolved than we thought. Some might argue that we are living the dying moments of The Empire Strikes Back, which means that in early 2017 we’re all heading to Jabba’s palace, so for Christ’s sake don’t forget your metal underpants.

Anyway, as Interestment does every year, it’s time to filter 2016 through a slightly different lens to see what really went down. See, when it comes to this site, it doesn’t especially matter what’s been going on in the outside world – this is a place of fence sitting and agnosticism, a place without No Smoking signs and you are allowed to walk on the grass. Let’s see what happened shall we? Yes we shall. Follow me…

It all started, as it does, with a changing of the guard. Out went the numbers 2015 to be replaced with 2016, and with that a sense of a clean slate, and a sponge-like mind ready to absorb fresh discoveries and new information. We discovered the joys of wearing loungewear, and of the little known soul singer Milton Wright, we also discovered how to customise your Five Guys burgers to essentially make them into Big Macs.

There were numerous laments to the writing industry, and worries about the future, and a couple of big pieces dedicated solely to silly jokes – the ones that never made it, the ones about Christmas that also never made it, 100 things we found out about Donald Trump.

And in amongst it all, a new character was born, developed, and then discarded because no one seemed that interested. His name was Dick Litt and he was thick as pig shit.

WORD UP, pizza be with you.