Writers, what is the future of your industry? Bloody hell I don’t know

An old typewriter, how quaintly lovely 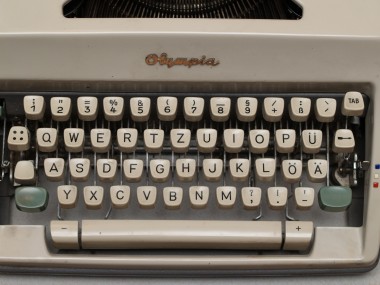 A message pinged into my email inbox the other day but rather than zip it open or immediately delete it like I normally would, I sat with my mouth a few millimeters open in deep contemplation for about eight seconds first. Like it was sent from the other side, it bore an existential question, and it was aimed at folk like me, brainiacs with literally no foresight who had decided to chance their arm at writing for a living. “Writers,” it started in the subject line, “what is the future of your industry?” I’m actually paraphrasing now, because I did delete it, it felt too raw, too real. But basically it was a short questionnaire from a well-intentioned source surveying how we might feel about The Independent closing, and the possible connotations behind no one really wanting to pay anyone for writing anymore. It was too bleak for me, if I wanted to stare into the abyss, I would literally go to an abyss and stare into it.

But needless to say, the question lingered. It’s been lurking in the backwaters of my mind for about ten years, and definitely since all of the magazines I loved and worked on started dropping like flies. The Independent (in my opinion, the best paper we had) is being piled high and torched into glowing ashes on a massive pyre just like so many mags have, and realistically how long can any of these other prehistoric news sources sustain themselves? You’ve got free papers that can tell you what to think without filling your pockets with change, websites that you can visit if you want to, now mostly minus any pay walls, and from what I can gather, millennials would much rather find out about the world through a serum or via suppository – neither of which require an exhaustive level of writing nuance, a good metaphor just muddies the waters. So writers, what is the future of your industry? It feels like no one has a real, genuine, plausible answer for this. Writers will continue to flood into the market looking for work, looking for their voice to be heard, there have been promises made about jobs suddenly appearing online, but I’m struggling to dot the dots here. I’m not a businessman, and it all feels very businessy now, like when people lie to your face but they’re wearing a suit so it’s cool. I suppose the question I have is “what the fuck guys?” and then a follow up question which goes: “Seriously, does writing as a job even exist now or not?” You can probably tell that I’m a very marvelous wordsman.

I started on this fun and exciting (excellent descriptive words) road almost exactly twenty years ago (give or take two or three years). And in the intervening time I’ve worked all over the shop – on magazines for teenagers, magazines for women, magazines for men, magazines literally for children, newspapers for grown ups, websites full of boobs, popular football blogs. And by and large, I’ve seen all of them hit the crest of a wave, and then eventually hit the skids too, so I’m an expert on having theories about where everything goes wrong and knowing what the future might hold. I am also very good at pointing the finger of blame at people who aren’t me. It’s never my fault. But here’s how it seems to work:

How to spot if a publication is at the top of its game and the future is looking good: the office is minimally full, no bustle, heads down, there’s an intense silence. One person to a feature, no one sticks an oar in, the editor is decisive, precise, honest, and (annoyingly) they’re also right about pretty much everything. There are just the right amount of cooks making the broth, no disruption in the force, no great marketing theories, just gorgeous looking people having an excellent time, prodding at the boundaries of what interests them, getting on with their job.

How to spot if a publication is getting it wrong and the future is looking murky: it’s noisy, people are everywhere. Everyone’s gathered around a bubbling cauldron attempting to craft features by committee. Suspicious-looking satanists in suits wander around casually tasting the soup, crippling creativity with their imposingly minty breath as they peer over your shoulder and ask what you’re working on. You start hearing talk of surveys, of focus groups and statistics. Flip charts are wheeled out, you’re told that there is nothing to worry about, this is just a casual look at some marketing theories about what kind of stories you should be writing, and what your headlines should be. The death knell starts to clang. Oh ignore that! Someone vaguely wafts their hand in the air casually. You attempt to giggle but instead you snort and a gallon of blood comes out of your nose and you start screaming and scratching at your temples. From a hospital bed, you wonder how a writer, whose currency is their ideas, could possibly survive when their editors are being usurped by people with no editorial experience?

What happened next for writers and their industry in the case of “the great caving in of so many magazines” (as it shall henceforth be known) was that some moved towards papers and found a bigger audience and greater success, some disappeared never to be seen again (except on Facebook), a few still managed to carve a niche in the magazines that survived the cull – one or two of which seem to be thriving (was it all too soon?). And everyone else went online, where the road to riches got covered in skidmarks and boulders, and then some wildlife started swanning around. Then a Mount Everest grew in the middle of the road, and the idea that a writing job could sustain you for your whole career started to look a bit preposterous. But hey, at least we had newspaper jobs to work towards! So what is the future of our industry now? I don’t know about the others, but my plan is to work on my “reach” then spend the rest of my career tentatively trying not to alienate a single person on Twitter with my overly long think pieces.

In hindsight I should probably have read that email.