Of course we’re worried, but thanks anyway “GRAPH” 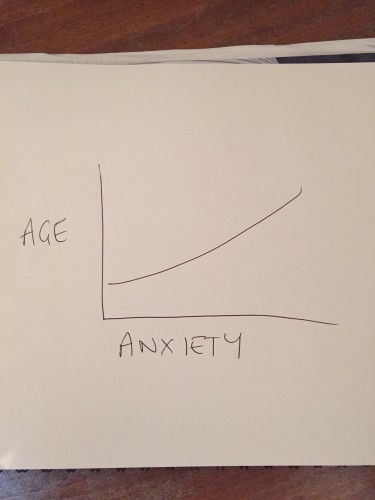 There was a statistic published last week that basically told me what I already suspected – that life is unforgiving, unpredictable, and stressful. It was a graph that showed how stress levels don’t diminish with age, but get higher. It was also exhibited as a pie chart, a venn diagram, and through a drunk interpretive dance and a very tearful poem that night to my wife. Just to really hammer it all home, we’re doomed. Your 40s will now be defined by a slopping fish tank feeling in your brain that never goes away. During your 50s you will be disorientated like you’re in the middle of a busy train station. Your 60s will be overshadowed by a crippling sense of anxious doom which will give way to abject terror then screaming, then you’ll hit 70 and suddenly everything will become okay. You’ll go to parties – sorry, funerals – and everyone will ask you lots of questions – because people are old and forgetful.

I’m sure it wasn’t always this way. For example, there was a time when you’d finish puberty and immediately go to war, after which life was probably a breeze. There was a short historical window where everything was ridiculously rosy – no big war to addle your nerves, you could pick up a nice place for two bob and get change, you could smoke without people tutting, jobs were forever. Now we’re in a situation where the idea of sitting in one place for your whole life isn’t only unusual, people would be disgusted by the very thought of it. You’re supposed to be ambitious, you’re supposed to be in a state of constant improvement. It doesn’t take Einstein or Columbo to figure that this might be where all of that later-life anxiety is stemming from. With our sense of fulfillment so intrinsically linked to the workplace, we’re basically looking to our bosses to nourish our souls and our bank accounts, which – when you think about it – is a preposterous level of expectation. Chances are that your boss is just you with a better haircut, or you under the careful watch of a less malevolent and unforgiving god. Or they’re just you but much better at everything. Whatever way.

Anyway, I’m due to hit 40 this year, I remember my dad hitting 40, and his father before him (could be lying), and it’s one of those milestones that you imagine when you’re younger, and you make certain assumptions about your future life. Some have come true – I’m married, I have a child, I’m a bit overweight, I have a wall of records, I occasionally take a swig from a pint with my hand on my hip. Some haven’t – I can’t drive, I’m not anyone’s boss, I have zero gravitas, and most pertinently, if an interviewer asked me where I see myself in five years, I genuinely have no idea. I thought I might have a shed and a midlife crisis – but there will be no sheds, and my midlife crisis won’t be a crisis, just a general sense of being, because I now know that there are no real certainties, there’s no sense of absolute security, I’ve seen the graph to prove it.

Of course, all of this points to a ridiculous sense of entitlement that I probably share with a generation that selfishly demands a vast stretch of green lights, but there is a wider connotation here too, which does need to be looked at. We’re now at a point where I’d be hard pushed to name a single person I know who feels truly secure in their job, who can look at what they do and know that it’ll last them until retirement. This means there’s a generation of people who are approaching middle age with no confident sense of structure, who will be tussling in the job market for at least another 20-30 years. Align this with the masses flooding in, and it’s hard to see how everyone will fit. Hence we’re all in a hurry to make money, we all want validation, we all know the carpet can be swept from beneath us – you sense that Lottery syndicates are massively on the ascendance.

This is basically a very long way of me saying I bought a meditation app.