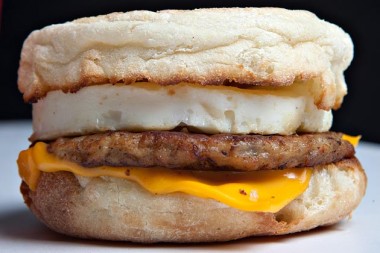 The age-old question about what came first the chicken or the egg has sort of been answered here. The chicken came first, because I recently did a piece on the best ways to enjoy it. So that’s sorted. Now it’s the egg’s turn…

Scrambled Eggs on Toast – a breakfast fave, a popular brunch, I’ve had it for lunch, and I’ve heard of people doing these for dinner. They’re versatile like an 11-year-old Spanish boy that can play left back or centre midfield or striker.

Eggs Benedict – the second most famous Sherlock Holmes after Cumberbatch, these prove that ham and eggs really can go together with muffins after all.

Egg Mayonnaise Sandwich – get your egg, mix it with mayo and a dash of mustard and serve on bread with micro-thin slices of onion in it. Not advised if you plan to spend the afternoon breathing into someone’s face.

Sausage and Egg McMuffin – the poor man’s Eggs Benedict or the wealthy man’s kick in the dick, whichever side of the fence you’re on, this is the best thing on the McDonalds menu and that includes their famous Zinger Tower Burger.

Scotch Egg – so-named because it was invented in London which is the capital of Scotland, this should ideally have a runny yolk to compliment to crispy breadcrumb bit.

Fried Egg Sandwich – nothing says “I’m here and I’m sexy” quite biting into a sandwich that spurts hot yellow fluid down your chin and onto your Bugs Bunny tie.

Cheese Omelet – made by forgetting to scramble your scrambled eggs because you were busy taking selfies or thinking about sex, the best way to hide your embarrassing mistake is chuck a load of cheese on it.

Boiled Egg and Soldiers – so-named because thin slices of buttered toast look like soldiers, dipping them in yolk is treat worth writing to your gran about. She’d appreciate the contact, TBH.

Welsh Rarebit – famously this was invented when a forgetful Welshman called Daf or Dai or Die went out to kill a rabbit and returned home with half a dozen eggs, a wheel of cheese and a bottle of ale.

Egg Fried Rice – this combines all of the boringness of rice with the thrilling textural intensity of egg. The sensation is one that cannot be described because it’s too amazing.