There he is, being all Keanu Reeves in Point Break 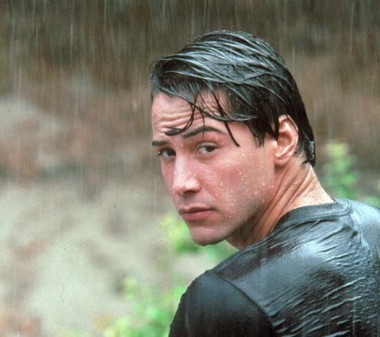 They say it’s impossible to spot a really good actor because they’re so immersed in the character that it feels real, they’ve become the person they were asked to play. Keanu Reeves isn’t in that category, there’s a chance that if you look really closely you can see him mouthing other people’s lines, but what Keanu has done amazingly throughout his genuinely excellent career is to turn up to whatever movie he’s just been cast in and basically Keanu Reeves the shit out of it. His character might be called JOHN or JACK, but he’s not going to inhabit either of those guys, he’ll be Keanu, he’s going to look puzzled a lot of the time, sometimes he’ll smile like a toddler who’s just remembered that ice cream exists. He’s going to wear his hair like it’s 1992. He’s a great man, and so here’s a list of his ten greatest films, in order of best to tenth best…

Point Break
Actually his second film with Swayze – they were both in Youngblood with Rob Lowe – this might be the greatest cops and robbers movie ever made. The best bit is where Utah’s girlfriend Tyler looks him deep in the eye and whispers “Bodhi will take you to the edge” then they board the love boat to Planet Sex. And not before time, the bulge in his wetsuit was starting to pulsate.

Bill & Ted’s Excellent Adventure
Keanu’s early-career reputation as a lovable lummox probably wasn’t helped by his role as the brainless high school dope Ted Theodore Logan. The character and the person became indistinguishable like art was recreating life or the other way round, life imitating art. Or it could have been life overlapping with art, or underlapping with life. It may have been like intertwining life with both art and life. And then art.

A Scanner Darkly
It’s a tricky balance trying to get a Philip K Dick book to work onscreen, but this can rub shoulders with Blade Runner and Total Recall any day of the week. Unlike those, this one retains the book’s original title. The other two were initially short stories called Do Androids Ever Think About Crisps? and We Will Take Your Mind and Fill it With Strange Information and There Will Be a Three-Boobed Woman.

River’s Edge
Keanu plays a baked-out teen struggling to understand why people would ever murder each other and then brag about it. His hair is at its absolute zenith throughout.

Devil’s Advocate
Keanu’s most preposterous film by far, but also his most mesmerising. The big twist is that Reeves finds himself being an ADVOCATE for THE DEVIL. Anyone who hadn’t read the title would never have seen that one coming.

The Matrix
The role Keanu was born to play. Once Will Smith had turned it down. And a handful of other people including Ewan McGregor had said no too. Keanu is Neo, a kind of science fiction Jesus who wanders around righting wrongs using kung fu or occasionally guns.

Bill & Ted’s Bogus Journey
Essentially My Own Private Idaho 2, this finds Keanu reprising his role as a lovable dope from any one of his many films.

Bram Stoker’s Dracula
Don’t miss Keanu repeatedly reinterpreting what it is to sound English in a film. His worst ever performance, but somehow it’s impossible not to adore this guy.