I’ve been a dad for almost four months, here’s what I know…

There we are, great pals… 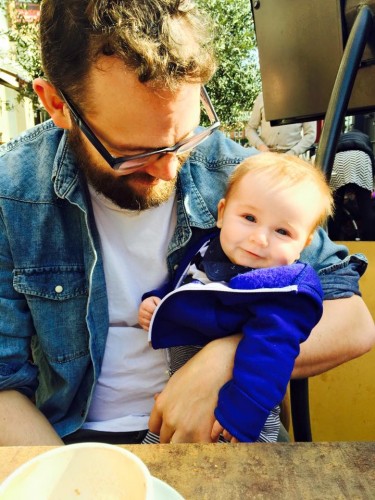 Until it finally happens in about sixty or seventy years time, I’ll never know what moments will flash before my eyes when I’m ushered to the pearly gates to meet with God or Satan or neither or when I just drift into the vast endless nothingness that awaits us. I’d wager a couple of hot dalliances from my 20s will make the cut, a few poignant memories from my childhood, some embarrassing moments like me springing out of bed because I’d sharted or me going in for a snog and her simultaneously doing the exact opposite of going in for a snog. My wedding day, the birth of my boy, yada yada yada. I doubt my mundane but vague triumphs like successful job interviews or blowing the perfect smoke ring will make it. But I did have a moment last week that I’m fairly sure will be in the final edit and it’s the direct result of a mutual decision to teach our boy to swim despite him only being a few months old. The plan is to school him in bravery from early on, bravery and strength. Swimming for now, next up smashing rocks then ripping his shirt open and shouting LET IT RAIN (and it raining). So every week we go swimming (we’ve been three times), the first lesson was spent with him looking confused in the water for two minutes, howling in the water for another two, then us hurriedly exiting the water and sprinting to the changing rooms with a furious and aghast baby. The following week, much better. Week three, HEAD UNDERWATER. Totally submerged like the lad on the Nirvana album before emerging like a cherubic Venus in a tiny little wetsuit with a face of pure befuddlement that made my heart explode. Without wanting to get too self-indulgent about it, I knew immediately that it was one of the moments that make all of this worthwhile – he’d discovered something amazing for the first time and I’d helped out with that. Cut to five minutes later when he was screaming in the changing rooms because his core temperature wasn’t perfect enough. That bit probably won’t make it through.

Anyway I’m a massive dad-bore now, I’ve almost entirely given up on sucking my gut in or trying to be down with the kids. I’m smitten, I write bullshit like this. Here are some more lessons I’ve learned in the last few magical weeks…

Your evening out just happens in the day – people tell you it’s all over but actually it’s not over at all, it just starts and ends much much earlier. In the old days I might swan out at 8.30ish, chat breezily to people, drink steadily until midnight before cracking on to shots then vomiting, snogging someone and hitting the hay. Now I’m older, I’m wiser, I get five down me as quickly as possible in kid-friendly pubs between lunchtime and mid-afternoon, then it’s off down the high street with a pram singing at the top of my voice.

I will never eat a whole evening meal in one go – we have once again stupidly ignored conventions like BEDTIME and as a result our evenings are spent with a baby on our laps chatting all manner of nonsense while we attempt to politely enjoy a sophisticated meal with one arm. When he’s finally bored with us and ready to call it a night there’s no warning shot, no thanks guys see you tomorrow, he just goes to sleep wherever he is like a really intriguing wastrel. I admire that.

It’s totally okay for babies to sweat – you probably knew this because you’re beautiful and clever, you understand things like logic and biology, you have common sense. But I’m certain that someone once told me that babies can’t sweat because they’re babies and BABIES CAN’T SWEAT, so when my boy got a bit clammy on a sweltering April day, I made a few panicked calls that I then attempted to style out when my mum basically started laughing at me for being thick. Turns out babies can totally sweat. Just as I thought.

He’s not going to remember any of this – the time he caught my eye from his pram and smiled like he’d spotted his best pal, the hours spent making weird and inexplicable noises then giggling to himself, his hilarious decision to sabotage our LAD’S ONLY bath night by pissing in it from distance, how genuinely gleeful we were when he produced his first poonami, being babysat by his doting grandparents, the joy unparalleled he gets from gentle breezes, swimming with his parents and going underwater for the very first time. He’s not going to remember any of it and sometimes that breaks my heart a little bit.

Just thank fuck he’s got a dad who writes a blog!

Hey everyone, Hipsters can’t die and I think I know why
Some words on the MasterChef 2015 finalists…