Here they are, being all cool 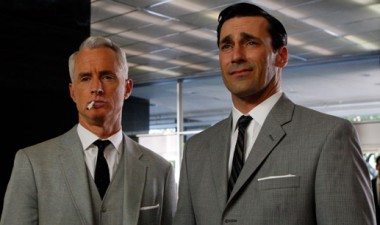 The gorgeous suits, the pomade, the facial hair, the nice views from balconies, the stylish furniture, the intro music, the words MAD MEN appearing on your television screen, the features about MAD MEN in newspapers, the blogs about MAD MEN, lads mags with cover lines like HOW TO BE DON DRAPER, other websites doing this exact same feature. Mad Men must be back, and so to celebrate here’s a very predictable list of the best characters….

Don Draper – started life as Dick Whitman, and went on to become a Dick Tit-Man! Seriously though, he’s complex like a jigsaw. How’s it all going to end? Will he charm himself to death as expected?

Peggy Olson – feminist trailblazer teaches the big boys that your brain cells aren’t located in your balls, they’re in your ovaries. Will Peggy ever just get married already?

Roger Sterling – he gets all the best lines like “hey if she’s on the menu, I’ll go large!” “bumpy ride please driver!” or “who wants two tickets to Sex Town? Hell make that three!”

Pete Campbell – like all great villains, Pete spends 90 per cent of the time curling his top lip like a bad Elvis Presley. The other 10 per cent is spent haggling with prostitutes or with women he wrongly assumes are prostitutes.

Sally Draper – for most child actors the extent of their talent is inversely proportional to their age. Not Sally, she could play a convincing Richard III!

Lane Pryce – as English as standing at third man playing the clarinet, Lane politely committed suicide after slightly embarrassing himself in a meeting.

Sal Romano – even when he was grabbing his crotch and shouting “oh she’d get it!” to impress the lads, the hand on his hip told a completely different story. Will he roll back into town proudly wearing chaps?

Stan Rizzo – fundamental to the show, Stan’s beard is the only prop that accurately tells you what year it is.