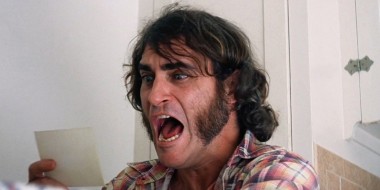 Paul Thompson Anderson remakes the Big Lebowski, but without the wit.

First things first: Paul Thomas Anderson is one of those directors who – any movie of his I’m watching, that becomes my favorite movie, his Alien Vs Predator movies aside, which are bafflingly poor. Magnolia is a masterpiece; Boogie Nights, a masterpiece; There Will Be Blood, obviously a masterpiece; Punch Drunk Love, a small quirky masterpiece and The Master is so much a masterpiece he even put half the word in the title. So what the fuck is Inherent Vice?

Oh, and an addendum to that, I also love Thomas Pynchon and think V is a masterpiece; Gravity’s Rainbow is a masterpiece… okay? Yeah, you follow me. So again what the fuck is Inherent Vice?

It’s not bad, it looks handsome and sounds fantastic, the performances are all good, Wacky Phoenix a likable comic lead. And PTA does TP justice, but that might just be the problem. Pynchon’s dialogue in the novel is a gag filled delight, taking from Chandler both plot and raison d’etre and giving us Marlowe played by Elliot Gould via the ‘Dude’ Lebowski, with Wolverine’s sideburns. But in PTA’s adaptation, the scenes are simply too long and too similar; one feels he’s too in love with his source material. More bothered about being true to it than creating a good movie.

At the behest of an ex-girlfriend Shasta (Katherine Waterson), private investigator ‘Doc’ Sportello (Joaquin Phoenix) investigates a pair of linked disappearances. Doing so, Doc comes across a parade of semi-crazy characters from a hopped up dentist (Martin Short) to a flat top cop called Bigfoot (Josh Brolin). The lugubrious narration is given by a beach babe astrologer Sortilège (Joanna Newsom) not so much to clear up the intentionally complicated plot, but to read out chunks of the novel. Pynchon’s prose is good, cinematic even, but it does not need to be here. Just as his wise-cracking dialogue crackles on the page but burns up way too much screen time. What should be snappy comes across as gassy. And people tells us too much that sounds more interesting than what we are seeing. A dentist dies in weird vampiric trampoline accident? Let’s see it.

Again Inherent Vice is not bad. It’s just – and it pains me to say it – not a masterpiece.

Interestment’s Top 10 Ways to Enjoy a Simple Potato
So I’m a bloody dad now, here’s what I know…