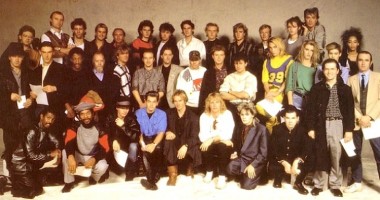 It’s now been 31 years since Bob Geldof, then 12, put together the first gaggle of popstars to sing Feed The World. It was a poisoned chalice that killed some of their careers, and yet also an unpoisoned one that saw some of their careers skyrocket like a rocket going into the sky. Yes, I’m looking at you Bono. And you Jody Watley. And you Johnny Fingers. Anyway, in “who sang what” order, here’s what became of the Band Aid 1984ers…

Paul Young – Paul famously sang the opening line “It’s Christmas time,” before chillingly ad-libbing the words “there’s no need to be afraid” for no apparent reason. This confused children. Should they be afraid? It was this kind of pointless dicking around that ultimately cost him his career.

Boy George – Next in came Boy George, hilarious dubbed BOY as he was obviously a beautiful girl. Or was he? The dresses, the hair, the stubble, the penis? Was he one of those homosexuals from films? It took years for old people to unscramble this unsettling visual conundrum.

George Michael – thick haired bruiser George Michael got busted chiseling cartoon vaginas onto a toilet door using a screwdriver. Since then there’s been no word.

Simon Le Bon – Frenchman Simon (his surname translates as THE Bon) brought his Gallic elegance to proceedings, and he also sang the line “it’s hard, but when you’re having fun” which you might notice doesn’t make any sense. Unfortunately this was in the days before Google Translate.

Sting – Midway through Le Bon’s section Sting suddenly appears on his shoulder like a genie from a smoke cloud. That’s classic Sting. Unfortunately after this song he disappeared into a log cabin to fuck his girlfriend for seven years straight and no one ever saw him again.

Tony Hadley – Famously the only artist who had to sing-read his lines from a sheet of paper, Tony never really recovered from the humiliation and was kicked out of Spand Our Ballet.

Bono – Bono lucked out when he got to sing the plum line of the song which went “WELL TONIGHT THANK GOD IT’S THEM (Ethiopians) INSTEAD OF YOU (small English boy)!!!”. Its legend grew and grew until it was revered simply as “Bono’s line”. He’s since been touring the line for nearly thirty years with his band You Too.

Paul Weller – the last of the soloists, Paul looked out of his depth surrounded by such big hitters and it really knocked his confidence. Hence he disappeared down Carnaby Street.

The others – the rest of the chorus sings like a Who’s Who of a Who’s Who from 1984. Bananarama, who are now all mothers to Bananaramettes, who in turn possibly have their own bananas. Phil Collins, father of Justin Lee, husband of Michelle, brother of Bootsy. The Kemp twins, both of whom emulated their father Ross by going into acting. Status Quo were there upsetting the balance (sorry, a little Latin joke there). Plus the rest of Kool and the Gang, Heaven 17, Heaven 18, and two thirds of Heaven 19. What a great day out.