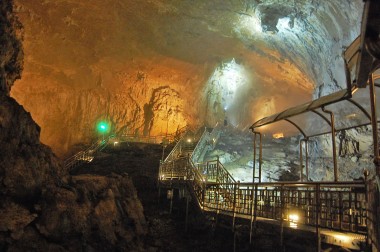 The notorious evil mastermind and international villain, Cardinal Boris, leafed through John’s appraisal form, frowning like he disagreed with everything John had written. John sat opposite in silence. The advice that his wife had given him last night was running over and over in his head: Be polite, but be firm. Be polite, but be FIRM. He had worked as a member of warehouse staff at this secret underground lair for 3 years and hadn’t received so much as a ‘well done’, never mind a pay rise. And this place had to be making some serious money, just look at the equipment: radar missiles, satellites, scientists, ninjas, launch pads, steel reinforced secret tunnels leading in and out, a domed ceiling that opened for the many armoured aircraft, a submarine dock, several torture rooms, and the guns; everyone had a work-issued machine gun. And the whole place ran 24/7; the overheads must be colossal. And Cardinal Boris was biggest bad guy on the planet. He kidnapped prevalent members of state for multi-million dollar ransoms on like a monthly basis, and at least twice a year he would hold the entire world to ransom by pointing illegally obtained missiles at the earth’s core, or the moon, or The White House, or an adorable litter of puppies. He must be rolling in it. So where was John’s reward? Sure, he was just a small cog, but he was a cog that worked damn hard. ‘Where’s my piece of the pie?’ he thought.

‘So,’ said Boris, slowly, his voice deep and treacle-thick, ‘under strengths, you’ve put ‘punctuality, reliability, teamwork and murder’, could you elaborate on that last point?’ His accent was vaguely Russian. He tapped at that section of the form with the end of his pen repeatedly, and interrogated John with his one good eye. The other eye was beneath a black eye patch and a scar ran down that side of his face, from forehead to chin.

‘I have never once been late – I’ve never even taken an sick day!’ John detected not a hint of Boris being impressed by this, and so he quickly continued. ‘And I have killed an intruder with my machine gun, and I think injured several others. Last year, when that superhero and his team infiltrated the lair. I shot one of them. In the neck. Some of the other workers just ran. Others got killed. I stayed and fought!’

‘Just. One. Murder’. Boris spoke the words as he wrote them on the form in the section titled ’employer’s comments’.

‘Plus some other flesh wounds!’ John interjected. ‘I think I hit one of them in the …’

There came a blood curdling scream from the corner of the room where a man in a tuxedo was hung upside down by chains whilst being interrogated and beaten by two brutes in sleeveless t-shirts.

‘Give me the codes, Claudius?’ Boris shouted over to him. ‘Remember, lies equal pain. This is your decision.’ Then he turned back to John. ‘What goals do you have for this coming year?’

‘Well,’ said John, and he realised that this was his chance.’I want to keep improving in my role of transporting and storing dangerous and illegal weapons and chemicals, and maybe work my way up to the Armoured War Bear Warehouse. I’m good with animals.’

‘…I’d also like to murder some more people.’ John added, and Boris nodded approvingly. ‘And,’ said John – be polite, but BE FIRM. ‘I also think I deserve a raise’. John was aware here that his voice did not manfully stride out of his mouth, instead it kind of stumbled out on weak legs like new born foal, or a drunk. Or a drunk foal.

‘AAARRRGGG, I DON’T KNOW THE CODES! PLEASE, TAKE THE SNAKE OUT OF MY PANTS!’ came the call of the tuxedoed man hung upside down.

‘A raise?’ said Boris, turning back to John. ‘I value you as a member of my team, Josh.’

‘But I’m afraid times are tough. The recession has hit us pretty hard.’

‘You just got 10 billion dollars ransom for handing back Justin Beiber! Or was it more? His fans from all over the world clubbed together.’

‘A fine idea, don’t you think? Some of the evil masterminds out there are still kidnapping political figures, but you get more for celebrities. That is why I am where I am. You’re working for the best. That should be incentive enough for you, Jim.’

‘I’ll tell you what,’ said Boris, ‘Why don’t we put you on a little program? Let’s see where you are in 3 months. See how much you’ve improved. And we’ll have another chat then. I’ll get my PA to put it in the diary.’

John thought for a moment, and he was surprised by the temperature of his thoughts; this guy doesn’t even know my name. He called me Josh. I’m not Josh. I’m John. I’ve killed a guy! Suddenly, words were coming out of his mouth.

‘No!’ he said, and this time his voice charged out his mouth and toward Boris like a war hero with a painted face. ‘I deserve a raise now. Here. Today. I risk my neck every day for you. I carry warheads over slippery surfaces. I lie to my friends about where I work – my brother-in-law is a police officer for Christ’s sake! I keep it a secret. He thinks I work at the swimming pool. I had to buy a leisure centre uniform just to keep up the ruse. My job description says ‘warehouse operator’ yet I’m dodging bullets on like a monthly basis. THERE’S NO MENTION OF GUN BATTLES IN MY CONTRACT.’ He was on his feet now, pacing up and down in front of the desk. Boris observed all of this calmly.

But John interrupted him. ‘Every day I drive to work and I worry that it will be my last day alive. And all for what? What’s it all for? You know how many of my colleagues have perished? 82. They get shot. They have to fight people WAY beyond their skill levels on little metal bridges high above the warehouse floor, and they just get thrown over. And yet, I’ve never seen you fight? Surely, you should be on the front line if you’re the tough guy, if you’re the ‘big villain’. But no, the good guys have to come through like 100 of us first. And they’ve got special skills and kung fu and shit, and we’ve got like zero fighting skills.’

His mind was racing. He was in the zone. It felt great. The two interrogators had stopped their torturing and both they and the tuxedoed upside down man were watching John. And John was flying on a wave of a confidence he had never before known.

‘THIS IS BULLSHIT, MAN. It’s your choice. If you can’t pay me I’m going to work for your competitor, Dr. Knuckle.’

There was a long silence. Boris raised his brow. ‘Finished?’

‘Good.’ He turned to his two sleeveless brutes and pointed to John. ‘Murder him with axes.’

Hark! Here’s some groovy music made on THE TUBE!
Kim Kardashian, 1983 – A Short Story by Josh Burt