Hark, a picture of MEEEE… 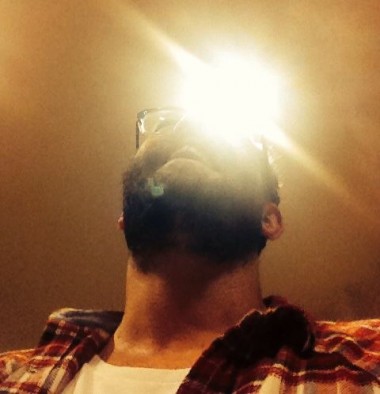 For a very brief window this week I became extremely famous, I enjoyed the levels of privilege and notoriety that would probably constitute around half a minute of Stephen Fry’s average morning, or three seconds of Harry Styles’ consciousness. For a flash I was a Twitter celebrity, and frankly it was fucking weird. I’m a fan of Twitter, I’ve been on it for about three years, one and a half of which were spent in abject confusion, as if standing on the sidelines watching city traders shouting nonsense at each other, but then I kind of found my groove. I started saying silly things that made me laugh in the hope that some of them might make other people laugh too, or occasionally I might tweet articles from this site to get four people to read them. Then, more recently, I started using it for work purposes, as I appear to have stumbled into gainful employment as a professional tweeter for various different companies. Hence my own fairly sparse Twitter account became the place where I could give tweet ideas a dry run, partly to see if anyone approved them with the odd Favourite or possibly a very occasional RT, but mainly to see how they might look suddenly appearing on your timeline. Would they read correctly? Were they worded right? Most importantly, were they GENTLY HUMOUROUS? If they passed the test, I’d use them again, if they looked rubbish I wouldn’t bother. The good thing was that I knew barely anyone would see them, so it didn’t really matter either way. And that’s when the unimaginable happened. I became a huge deal. For about half a day. Possibly in my own head. Now, make no mistake, I’m no big fish, I’m not one of Twitter’s arch social commentators, I’m not breaking any news, I’m not part of the intimidating cool gang – the most retweets I’ve ever had is something like 15 and that was ages ago. Plus I’d made a few similar quips over the last few months about pretending to be on holiday by walking around in swimming trunks, or by wandering topless into restaurants and shouting for steak, so I wasn’t expecting much when I tweeted:

recreate your holiday by wandering into Greggs wearing swimming trunks, pointing at a sausage roll, shouting TWO and paying with a £50 note

It’s quite funny, it’s OBSERVATIONAL HUMOUR, I thought if it looked good it could be adapted for someone else, but then it unwittingly tapped into something and morphed into a giant bellowing monster like The Blob in the movie The Blob. One retweet, two… the unthinkable happened. Three retweets! Then someone else retweeted it. People began to Favourite it. My heart started racing like a big red heart-shaped piston full of type O blood (or whatever my blood type is), and if I have one of those small squiggly veins on the side of my head that too probably began pulsating. It scurried past my previous record like it didn’t even exist and kept hurtling onwards. A few people with legions of followers approved of it enough to press their RT buttons, not realising that they were completely changing the course of my life for the next couple of hours. I became obsessed, almost insane, completely ruled by numbers, I was drunk on my own amazingness. I imagined the interviews I’d have to do, the free clothes I’d wear, the money falling out of my pockets as I walked around signing autographs on people’s tits. God, THE MONEY. Where would it all go? I could probably buy my flat outright and then I’d never really need worry again, about anything. Finally my talent had been unearthed. Fifty people became well into the hundreds, and it wasn’t stopping. I was gaining followers too, roughly one to every ten or twenty retweets. They were waiting for me to say something hilarious again, I just knew they were, I was their new comedy messiah, the hottest property on Twitter, because look at me, I suddenly had over 600 followers – that’s enough to slightly fill a small area of the Hammersmith Apollo.

I stared blankly at the screen taking deep meditative breaths as I waited for my next explosive moment of divine intervention, every muscle in my body, including some weird undiscovered ones around my arse area, tightened. “Okay Josh, you’ve had a breather, so now just be really funny again,” I thought. “But, you know, not your usual silly funny, you’re in a higher comedy sphere now, so it’ll have to be really hilarious, and definitely an astute observation. Oh and make it something that no one has ever noticed before even though it’s right there in front of their faces the whole time.” IN through the nose, OUT through the mouth, I imagined my new disciples, sitting cross-legged like expectant school kids in the greatest assembly of all time just waiting for me to deliver another “observation”. They were probably all smiling already in anticipation, too scared to take a sip of tea in case it came spluttering out of their mouths, or worse still snorted from their noses. I threw up slightly in my mouth, my vision became a bit blurry, I refused to accept that perhaps no one was waiting for me to say something and that they’d all moved on to something else within seconds of reading my quip. COME ON, BE FUNNY I was close to tears, I may have momentarily contemplated closing down my account and walking away as the only way out of this. At least I’d have left the stage at the very height of my career and would possibly go on to become a Tweeter of legend. I could take heroin, that might calm me down? And then it dawned on me – this microscopic moment, this single wrinkle on a giant geriatric face of a withered old man, this tiny little grain of sand under a huge monstrous toenail, must be in someway how it feels every day if you are actually really really famous. I wanted immediate approval, I clung to the idea that every tweet would be met with a thunder of applause and an avalanche of backslapping and retweets, I basically morphed into a complete dick for an entire afternoon, and I think I honestly hated every minute of it.

Hence I shall now go back to being consistently not-nearly-as-funny-as-I-was-with-that-tweet. On purpose, you understand?

Hey everyone, here’s a list of THOUGHTS I had over a 12 hour period
Holy shitballs it’s Podcast #30!