Including one of these things… 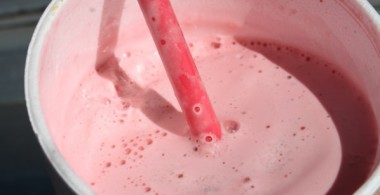 The indelible bond between people and ice cream is one that can probably be traced back to the dawn of time, when the first lizard to crawl from the boggy swamps was forced to shut his toddler lizard kids up by giving them a cool refreshing treat. Since then, ice cream has been an important currency between man, woman and child – used in exchange for your good behaviour when you’re a tot. As young adults you’ll find it licked seductively by the opposite sex, which sends confusing currents from your frontal lobes to your gigantic aching balls. In early-married life it’s an occasional one-off treat. Then finally, as the nails are readied and the furnaces are heating up, you’re old and ice cream is all your flailing insides can digest. With that in mind I’ve finally settled on the ten greatest ice creamy treats in the world…  you’ll notice that one of them is a Coke Float. Seriously. A Coke Float!

Almond Magnum – I’m currently in the process of trying to wean myself off these, they’re almondy, creamy, and more addictive than the good heroin that people take. Not the godawful stuff like in Trainspotting or Grange Hill, more the sexy alluring kind they use in movies like Pulp Fiction. Delicious.

McDonalds Strawberry Milkshake – with most foods, if you leave them in the sun too long they become gross and inedible, but ice cream melts slowly and seductively like a woman doing a striptease and before you know it you’re face down in a bowl of milkshake. The best ones can be found at McDonalds just to the left of the conveyor belt area that churns out delicious burgers made from various unspecified animal arsecheeks and toenails.

Ice Cream Snickers – about twenty years ago it became very trendy for chocolate bars to moonlight as ice creams, so you suddenly had Mars Ice Cream, Twix Ice Cream, Maltesers Ice Cream, Bounty Ice Cream, but the best was Snickers. It combines peanuts with caramel, making salted caramel, then ice with cream, making ice cream, then cocoa with other ingredients to make chocolate. Then someone puts a wrapper on it in a factory, another guy carefully paints words like Snickers and Ice Cream onto that wrapper using special paints, then they get transported all over the world by men in trucks with freezers in the back of them, and eventually they end up in shops where kids shout at their mums until they cave in and buy them one. The circle of life complete.

Pistachio – traditionalists go for boring flavours like Vanilla or Ready Salted, but people with a bit more juice in their veins know that the true genius of ice cream can be found in a small nut from western Afghanistan. It’s called Pistachio (pronounced: “Piss-Tash-Ey-Oh”) and it tastes delicious. Plus it’s green, which is absolutely hilarious.

Ben and Jerry’s Cookie Dough – don’t try to figure out who Ben and Jerry are, that’ll just lead you down a weird Keyser Soze backstreet and everyone you know will end up dead. Just enjoy their wide range of flavours, which peak with Cookie Dough which is made from uncooked biscuits. It was presumably invented by accident.

99er – not to be confused with a 69er which is a complicated sex move that finds a bearded sketch drawing of a man meeting head on with a woman’s hairy vagina while she simultaneously has a conversation with his groin. But if you add 30, it morphs into a far more family friendly number, which is code for a Mr Whippy with a cheap chocolate bar jammed into the top for an extra quid.

A Coke Float – when I was a lad back in the 1950s we all used to sit in diners watching waitresses on rollerskates hurtling around clumsily spilling cheeseburgers onto the floor and stacking it by the tills. The best bit was using our ration books to get Coke Floats, which mixed the magical drink Coca Cola with a single dollop of Vanilla ice cream.

Haagen Daz – nothing says “I intend to have sex with you” quite like inviting a chick over to your house, then scattering rose petals from the front door all the way to the bedroom where she’ll find a million blazing candles set to a Best of Mellow Ibiza soundtrack. In the middle of it all sits a tub of Haagen Daz and a bowl of strawberries. What starts as gentle and seductive foodplay ends with Cookies and Cream all over your thighs and the curious sight of people smooshing perfectly good fruit into one another’s tits.

Choc Ice – in the olden days these probably came wrapped in newspaper and delivered to your door by a war veteran with minor brain damage. Rumour has is they were made from pig’s guts. But nowadays you can just pluck them from the freezer at Sainsburys and no one’s any the wiser. The perfect post-coital treat for non-smokers.

Viennetta – if you asked a bus stop of school kids what they were hoping to have for pudding when they got home, three would say Jam Roly Poly, one would be hoping for a Crème Caramel, one would have to shiv you in the neck for being a grown up. The other two hundred and thirty three witnesses would shout Viennetta so loudly and in unison that the planet would momentarily skip on its axis.

What the actual MF!! It’s Podcast #26!
A tale of one woman’s bumpy love journey