Some more things that definitely happened to you at university

Hey has anyone seen my Le Creuset casserole dish? 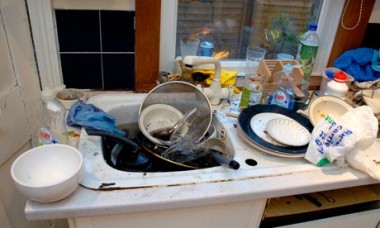 I was dusting off some old notebooks the other day and I stumbled across a big STUDENT CHECKLIST that I’d compiled a few years ago– some of it made it onto the site, some of it didn’t, so I thought I’d include the stuff that didn’t, just for fun…

You dumped your childhood sweetheart – back in my day loads of students turned up at university with a crumpled black and white photo of the gal waiting for them back home. She looked sweet, homely and loving, and two days later that photo peered forlornly from the floor while they bounced around on some other doris.

(FYI: don’t worry, I’m all women’s lib, feel free to reverse the gender distribution in the above paragraph to suit)

You listened to reggae and lied about going to festivals – I did both of these things on a regular basis. The reggae I actually liked so that’s good. I’ve still only really gone to one festival though – although I’d probably up that number to around three if you asked me in a high pressure social situation.

You tried to be a vegetarian – you’d seen animals dying on Youtube and it hadn’t made you laugh as much as you’d expected. I’M KIDDING I’M KIDDING. You fancied a vegan girl so thought you’d impress her by eating a spinach parcel one afternoon. It didn’t take.

You worked in a bakery with a guy covered in right wing tattoos who had recently discovered both God and the Holy Spirit (and Jesus) and felt it his duty to spiritually guide you when you weren’t flogging flapjacks to builders – God I miss that guy. By which I mean I don’t remotely miss that guy.

You applied for the hardship fund because you’d run out of drinking money – I did this and I am literally the most middle class human being there has ever been.

You had a rota on the fridge – everyone had a rota on the fridge, it was ALL THE RAGE and my favourite thing about rotas on the fridge was that if you just ticked them off regardless it gave the illusion that you might have done your bit. “Josh are you sure you hoovered and dusted the lounge?” Adolf Gaddafi would shout up the stairs while a family of inbred cats enjoyed a shit-everywhere party in there. “It’s just that there seems to be a lot of cat shit in there!”

You puked in front of people pretty much all of the time – while you’re at university it becomes extremely easy to forget that there was a time when you didn’t end an evening by barfing down a wall while people laughed at you.

You adopted a bad television program as an ironic favourite of yours – in my day which was the mid-1990s we’d all laugh hysterically at Topless Darts which was a tits-out throwing competition aired on a forgotten cable channel. It was HILARIOUS, if you think that forced loud laughter can honestly offset a deep spiritual yearning, a war raging within, my heart was hurting, wanting the love of a girl, any girl, just so I could learn to understand the wobble of some real boobs rather than just guffawing with my “friends” in “inverted commas”. Fucking hell university was a deep inward journey for me. You probably just sat around pretending to like Cash in The Attic.

10 things I’d like to be able to do that girls can totally just do
MasterChef 2014: The Finalists (and who should win)