MasterChef 2014: The Finalists (and who should win) 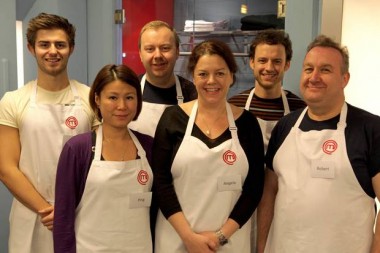 It’s hard to know who the real winner is when it comes to MasterChef. Gregg Wallace and John Torode are both winners because they get free dinners, Marcus Wareing wins because there’s now a bit where he walks in like the baddie in Die Hard and sniffs spoons like they might have trodden in dog shit. I win because I love watching MasterChef and always have, and one of the contestants wins because they actually win. And make no mistake, this is a competition, the people in those kitchens looking out of the window while a potato slowly bakes in the oven are athletes at the very top of their game. It’s been a spectacular series so far, and now it’s down to one of these heroes to walk away with the prize….

Ping – was Ping named after the noise a microwave makes when it finishes cooking food, as if her parents were making a subversive and ironic observation about their newborn baby’s spiritual and culinary destiny? No you moron, Ping’s family is from Malaysia where names like Ping are probably the equivalent of Peter or Angela (more of HER later). They’re commonplace, you need to broaden your horizons. Anyway I’m not sure where any of this is going except to say that Ping is champing at the bit and romping home with this one, which is all racehorse speak for her being the one to beat (which is also racehorse speak). She can cook the lot, and when she does fusion food the cameras have to quickly pan upwards because there’s a tightening in the Torode trouser department that isn’t fit for pre-watershed ANYTHING. Go Ping!

Luke – I feel like I wrote an awful lot about Ping, but don’t worry I’ll be more concise with the rest of them. Luke is BONKERS and INSANE and TERRIFYING and he’s only capable of making amazing canapes, so if I was staging a buffet, I’d definitely put him in charge. If, on the other hand, I was staging an all-female musical version of Goodfellas and they needed feeding before a big show, Luke wouldn’t even cross my mind. These hot chicks in men’s clothes need a proper plate of food, not a scotch egg on a toothpick or a miniature chickpea taco. That’s how much Luke polarises even my own opinion of him. Dark horses probably think he’s a dark horse (more racehorse speak).

Jack – Jack is the hot student with the hairstyle who looks destined to follow in the footsteps of the legendary Bristolian chef Dean by not winning MasterChef but landing a spectacular TV gig on something like Lorraine or This Morning with Anne and Nick. So far his best dish was a lobster with something else and a raviolo (which means “one ravioli” in Italian). No racehorse speak in this paragraph, sadly.

Angela – Just as day follows night, so Angela follows the other three onto this list of MasterChef finalists. She’s a little bit older than the others which in some walks of life would count against her, but thankfully MasterChef doesn’t roll with that agism bullshit – you only have to travel back in time a few years to find them handing the trophy to an extremely old man. I can’t remember his name. No one can. There’s a good chance that even he can’t remember his name. Anyway, Angela makes lovely plates of food in a no-nonsense kind of way, and she even uses the kidneys and hearts and other offcuts that most of us would chuck on the pavement. She’s the outsider (racehorse speak).

Ping will win. Ping or Luke. (or one of the other two)