One of my many heroes: Dick Cavett 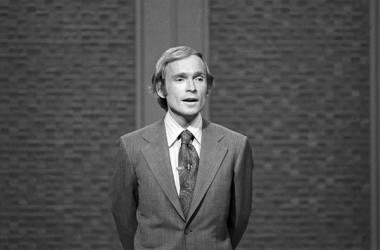 My intuition tells me that Michael McIntyre launched his own chat show the other day – I know this because people on Twitter were on about it and I missed the grand opening night on account of being on holiday in a little place called Tie Land. If you haven’t been you should go IT’S BOILING HOT, and if you have been you’ve probably got some of your hair beaded already so you don’t need me telling you what to do. Either way we’re all winners! So anyway, McIntyre launched a chat show, I love chat shows so I thought I should say a few words about them and now here I am writing this few paragraphs which will eventually be about a guy called Dick Cavett, but before we get to a guy called Dick Cavett I’m just going to do a very quick summation of British chat shows and why we get them all wrong. It’s simple: casting.

Too many clowns not enough ringmasters. McIntyre, Norton, Carr (Alan) would all make great interviewees but them hosting is a mistake, Jonathan Ross occasionally gets the balance right but like a steak cooking in reverse it’s getting rarer and rarer, Wogan was sporadically good but occasionally came off as creepy, Johnny Vaughan could have been decent in his prime, Frost and Parky are rightly held in some kind of esteem by most but Parky wasn’t for me at all.

We should be looking to people like Kirsty Young (excellent on Desert Island Discs) or Louis Theroux (always brilliant) to do this kind of thing and I mention those two specifically because they both remind me a bit of Dick Cavett, and Dick Cavett is one of my all time heroes OF ALL TIME. And I say that with full awareness that I’ve just said “all time” twice in the same sentence. That’s how much I love him – I’ll happily make shit vocabulary misjudgments all day long just for Dick.

For those who don’t know, as I didn’t until around six or seven (or possibly eight) years ago, Dick Cavett was one of the leading chat show hosts in America in the 1960s and 1970s and quite possibly long after that too, but his legend lives on in a series of amazing interviews that you can easily find on Youtube. A balls-out kind of chat show host in no way whatsoever (short, clean cut, suited), he’d often just interview one person for over an hour on his show – The Dick Cavett Show (GENIUS!) – which is a bold fist-pound of such confidence, such sure-footedness, one so self-assured that modern station bosses would immediately bleed out of there noses just thinking about it.

“Holding people’s attention for that long?” they’d hiss before adopting pirate voices for the sake of making this two line paragraph more entertaining, “it’s impossible, I tells yer! Impossible! IT CAN’T BE DONE!”

But it can be done. Dick Cavett did it, and it’s exactly what he did best, he held your attention, he asked interesting and sometimes difficult questions, he could cope with occasional silences too – especially when opposite someone powerfully shy like Marlon Brando or just painfully shy like Jimi Hendrix. As a fucking dreadful journalist and shockingly bad interviewer myself, watching Cavett locate and navigate to the high point of the conversation with his subjects is like watching an artist doing LIVE ART.

What made him great was that he clearly did his homework, he didn’t condescend to his guests or his audience, he managed to be both light and humourous and intense and curious at the same time. He was sharp and charming and loads of other things I’d definitely want to be, but most notably of all, each and every interview centred entirely on his guest and their thoughts and feelings about the world around them. No gimmicks, no attempting to upstage or smudge his own fingerprints on them, to bask somehow in the reflective glory of their limelight, it was their time under the microscope with him there to simply nudge and probe and occasionally fill in the gaps.

There’s a lovely bit in his interview with Orson Welles – which might just be my favourite of the lot – where the overpowering and charismatic Hollywood legend attempts to divert the spotlight onto his host and the way Cavett squirms at the attention makes it impossible not to love him even more.

I urge you to look him up, go to Youtube and type in DICK followed by CAVETT (or just go here), enjoy him talking to Brando, to Hitchcock, to Groucho Marx, Janis Joplin, Woody Allen, John Lennon and Yoko Ono, George Harrison, Truman Capote, Raquel Welch, John Cleese, David Bowie. The Rolling Stones. It just goes on and on…

Here he is chatting to Alfred Hitchcock…