Friend of the site Dan Fitch tells all… 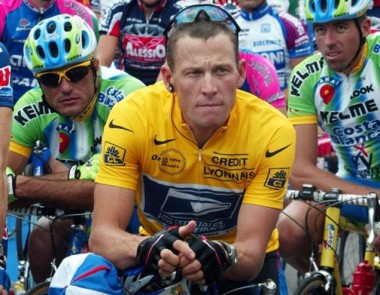 Nobody likes a cheat, but everybody loves a winner. It’s therefore pretty obvious as to why people cheat. This is especially true in the world of professional sport, where the rewards for winners that everybody loves, can be huge. The risk of course, is that the cheating will be exposed. Some of the biggest sporting careers have teetered on such a tightrope. Such as these ones…

Ben Johnson
In an ideal world there would be two Olympics. One where everyone promises not to do anything naughty and another ‘anything goes’ affair, where competitors are allowed to take as many steroids as they want and get themselves tooled up with robotic legs, in an effort to finally crack that one-minute mile.

Instead we’re left with a situation that no one is happy with. Just the one Olympics, where no one is allowed to cheat but plenty of athletes do in order to gain an advantage. One such fellow was Ben Johnson, who in the 1988 Olympics whizzed past the 100m finish line at such a speed that video replays had to be consulted to ensure that he wasn’t on a moped. Johnson broke his own 100m world record as he beat Carl Lewis into second place with a time of 9.79 seconds, but he was stripped of his gold medal almost as quickly. Three days later Johnson’s urine samples tested positive for stanozolol. The Canadian sprinter was not laughing out loud when he was disqualified.

It says much for how this affected Johnson’s life, that ten years later he was involved in a race against two horses and a stock car. Johnson finished third – acting as a proof that athletes shouldn’t cheat if they want to keep hold of their dignity.

Hansie Cronje
Cricket betting is big business. Mainly because the average cricket match involves so much standing about, waiting for something to happen, that the average spectator would be bored shitless if they didn’t lob a bet on every now and then. With so much gambling going on it’s little wonder that players are approached to fix a match and find that they can’t resist the financial temptation. Yet you wouldn’t expect that one such player would be Hanje Cronje – the South African captain and one of the best cricket players in the world during the 90s.

In 2000 it was revealed that Cronje was involved in match-fixing with an Indian betting syndicate. Unlike the England cricket team of the time, South Africa could not be relied upon to lose on a consistent basis, so Cronje’s palm was greased to make things more predictable.

Cronje was banned from playing cricket for life, which sadly, was not to prove a particularly long time. In 2002 Cronje was killed when a plane he was on crashed into a mountain, killing him and the two pilots. Theories abound that Cronje was murdered at the behest of the gambling syndicate.

Tonya Harding
Ice skater Tonya Harding found herself with a problem prior to the 1994 Winter Olympics. Her rival Nancy Kerrigan was a much better ice skater than her. What’s a girl to do? Harding’s cunning solution was to get a hired goon to break Kerrigan’s legs, presumably with the intention of making her rival much less good at ice skating. It was a plan that was destined to work, if only Harding’s hired goon had actually managed to successfully break Kerrigan’s legs.

Instead the goon merely bruised her thigh which from a medical point of view is not nearly so serious. Harding probably got a partial refund for this mistake but had to live with the fact that Kerrigan recovered from her injury to win the silver medal at the Olympics, while she languished in  eighth position.

Then Harding was given probation, 500 hours of community service and fined $160,000 for her part in the attack, before being banned from ice skating for life. In many ways the whole scheme can be said to have backfired on her.

Lance Armstrong
Have you ridden a bike before? You probably found it pretty easy and fun when you were going downhill and then absolutely, earth-shatteringly agonising when going uphill. Yes, cycling is a tough pursuit and it doesn’t get much tougher than the Tour de France – an event that involves a hell of a lot of uphill cycling. When an event is as tough as the Tour, it’s perhaps no surprise that people get suspicious when the same bloke wins it every year. Lance Armstrong was such a bloke and for years angrily denied allegations that he took performance enhancing drugs.

It turned out that Armstrong was in fact a complete bullshit merchant. In 2013 he appeared on Oprah Winfrey’s TV show and admitted that all seven of his Tour de France wins came with the help of doping. The last time that a career was destroyed so swiftly on Oprah, Tom Cruise was jumping around on a chair and declaring his love for Katie Holmes.

About the author: Dan
View all posts by Dan →