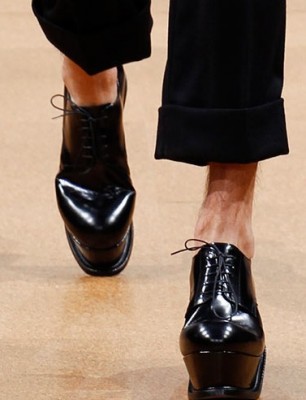 Hello boys, are you excited that it’s Men’s Fashion Week in London? You didn’t know?  Were you all too busy chopping down trees, fixing cars and being rugged?  You sexy bruts! Fear not I will be able to help you decipher the catwalk trends and tell you what to save your wages for come Autumn/Winter 2014.

How would I know and why should you listen? You see I work in fashion, not as a journalist but doing the real work behind the scenes, under the tables and on top of the bars. I have spent the last twenty years cutting, pasting, eye rolling, bitch slapping, bedazzling, stapling, bribing, and bullying creations for you sexy buggers.

My job is to know what you will want, and it turns out that what men want is as many sexual partners as they can get without getting caught and a  roast leg of lamb once a week. But occasionally they buy clothes and snazzy trainers to help them attract the ladies, which some dicks like to call “peacocking”

So, I know stuff, I am legit, too legit to quit just like MC Hammer. Being legit means I get paid too little to afford the legit garments from the catwalks just like you. And what your silly oversized man brain doesn’t understand is that wherever you shop you will still get a watered down, cheap, bastardised version of the mad threads you see here on the catwalks.

So get ready it’s all coming to a JD Sports near you very soon.

Here’s a little insight from JW Anderson on the inspiration behind his platform shoes for blokes: “I love the idea that when you look at portraits in old houses, they’re always positioned really high,” he said. “That was the idea with the shoe — that idea of elevation. When you look at the face, you have to look up at it.”

The JW Anderson line was bought last year by LVMH who own loads of labels but their main business is, you guessed it – Louis Vuitton, Moet and Hennessey.  That’s a lot of booze and handbags they sell, and thank goodness for that because it allows them to plough all of that money back into supporting this kind of staggering talent.

I can only imagine the inspirational journey that JWA had to go on to come up with this unique brainwave. Obviously it would have been essential to rent a palace somewhere in the south of France for a month to gaze thoughtfully at pictures that are dead high up. Then trot back to the studio to literally shoehorn that idea into a feeble explanation about why you’re making men’s platforms.

I’m going to get T shirts printed for the CEO of LVMH with a picture of Dave from Slade on the front with the slogan: “My creative director went to the South of France for a month, it cost me £750,000 and all I got was this lousy T-shirt and some wedges.”

Expect to see on the high street: Any Italian using this as an excuse to wear a Cuban heel.

Next up, Burberry’s opening look was a string vest, silk scarf and bowling bag made with strips of pub carpet.

Inspiration – Dad went out for a quiet game of bowls but ended up getting leathered down The Legion and arrived home at 7.30 am.  Mum hits the fucking roof when she sees another woman’s scarf round his neck and kicks him out. Mum let us listen to Shabba Ranks in the car on the way to school as a treat.

Sure, I read some interesting quotes from Christopher Bailey about what inspired him to come up with this collection. But I had to read them four times then go to the kitchen and check the packet of Lemsip I was drinking to make sure it wasn’t  hallucinogenic, and then read it again.  It’s something or other to do with a big expensive painting that he bought by a bi-sexual artist.  Or something. Also he likes horse blankets and the kind of carpet that someone in Bloomsbury had – maybe Lucien Freud, or Sigmund, or it may have been Bella…someone that Bailey thinks is really cool basically.  Anyway the point is that he was referencing a bit of carpet, literally scraping the floor for ideas.  Nice one.

Expect to see on the High street – exactly this look because it costs fuck all to make.  The high street all wipe their brows and high five each other, happy in the knowledge that everyone will want this look.  We all celebrate with some tasty Moet and Hennessy.

Inspiration – Frankie goes to West Hollywood and has a gang bang with the Sheriff’s department.

Of course there was a statement from Diesel’s new Creative Director speaking at Pitti Uomo, he said: “I’m so excited to be showing my first collection blah blah blah”… But exactly zero shits were given as everyone hot-footed it back to the showroom and ordered another 57,000 puffa jackets and 69,000 units of bleached denim for each Diesel outlet.  The end.

Even though we are only a few weeks into the grueling fashion calender there has sadly already been a mammoth fashion injury resulting in a full scale fashion emergency at Pringle.  The official line on the inspiration for the A/W collections were that it was inspired by this moving performance of Danny Boy, an original Muppets classic:

However rumour has it that there was more to it.  An insider had this to say ”Both Ronnie Corbett (Creative Director) and Jimmy Tarbuck (CEO) were fooking devastated on the morning of our London Fashion Week show when our model turned up with a severe rubber necking injury”. The model’s neck had been so severely stretched it had grown a further 10 inches in height.

“Tarbuck went absolutely mental swinging around a golf club and smashing up expensive eye shadows. At one point Tarbuck was so enraged he had to be restrained from strangling the model which only exacerbated the injury stretching the neck a further 3 inches!!!”

Fortunately Corbett (formerly Creative Director of Lyle & Scott), who is known in the rag trade for his nimble miniature hands and credited for helping the company take back a lot of production from the children in China, was quick to react.  Ronnie knitted up some extra-long necks for all of the garments to cover up this grotesque fashion affliction which meant the show could go on.

Rumour also has it that the model pictured above had spent the previous month with JW Anderson in a French chateau which may account for his injury.

Both Corbett and Tarbuck refused to comment on this rumour when questioned at the end of the show but just winked and said “That’s showbiz!”

So guys, whilst you sleep tonight be safe in the knowledge that round and round the industrial estates of the M25 and in and out the dust roads of Shenzen China we are hard at work. The I.T teams are working around the clock putting back-breaking amounts of paper in printers and turning computers off again and on again to ensure that the UK high street can print these inspirational messages from the catwalk and get some similar product made in polyester for 0.0005 pence.  Available to you for £50 in just two weeks.

And as for my next collection? Well I’ve just drafted up an email to my boss regarding an essential piss up… err I mean inspiration trend trip to Hawaii.  Spring 2015 is all about the grass skirt, you heard it here first, and you’re very welcome. 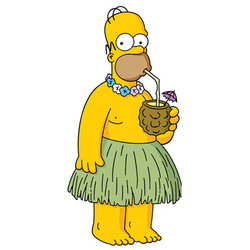