FILM REVIEW: Utopia (and a bit about Question Time) 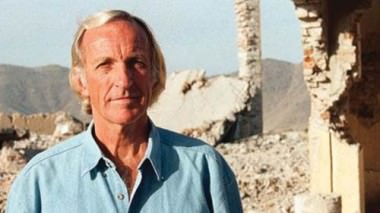 It doesn’t seem to matter how many times the world spins or how many brick walls we as a collective human race smash into along the way, no one learns much. As opening sentences go that one’s probably about the most miserable start to anything I’ve ever written on Interestment, but don’t blame me, blame yesterday, it’s all yesterday’s fault. I was fine when I got up. It was a moderately nice day, I had a decaff and some Sultana Bran, I was acing it so far and literally anything could happen, then I remembered that I had a DVD to watch and review called Utopia, which I’ll get to in a sec. I watched that, I went about the rest of my day feeling a bit flat and then in the evening I poured myself into some pajamas fixed myself a White Russian like I was The Big Lebowski and watched Question Time which I very rarely do. BIG MISTAKE. I don’t often allude to or write about serious global situations because I’m not very clever and can come easily unstuck, but if you’ll indulge me I’m going to express a couple of reactions then we can all move on.

Firstly, let’s all stop being dicks. I might be one of those horrible lipstick Lefties who just wants everyone to love one another and have bi-sexual inter-racial weddings and a sing-a-long, but watching loads of my brothers from different mothers and sisters from different misters giving it the whole “why don’t they go back to where they came from” and “I can’t understand a bloody word of it” schtick on Question Time made my heart sink – not very 2013 dudes.

And then Utopia – a gripping documentary about Aboriginals by John Pilger. I have so little knowledge on the subject that I’m not even sure if I’m allowed to say Aboriginals. A couple of people also said First Australians, one guy said indigenous a lot. I don’t know. Pilger said Aboriginals so I’m taking his lead on this. The two hour doc examines the dreadful living conditions they have to endure which act in stark contrast to the wealth and beauty of the rest of the country, almost like a modern day atrocity that’s being perpetually swept under the carpet. And for that reason it’s your duty to WATCH THIS DOCUMENTARY. It plays like a very long news report which can be frustrating if you’re used to slick editing and cool soundtracks and ringtones, but come on let’s not be childish. Pilger is a news journalist – he traces years, hundreds of years, of neglect of a people with very real suggestions of an ongoing apartheid to rival South Africa of old. Babies being taken away from their families, bogus reports of mass sexual abuse, levels of poverty akin to Victorian London, it was all pretty grim. There’s even a concentration camp that’s been turned into a luxury hotel.

Anyway, what I learned from my intense day of politicising is that we need to move forward quicker, and we need to be nicer and groovier to each other. How’s that for a manifesto?

DOUBLE WHAMMY MOVIE REVIEW: How To Survive a Plague, and the new THOR film
The story about the time I went to the MTV Awards in Stockholm

One Response to FILM REVIEW: Utopia (and a bit about Question Time)