The 9 greatest gadgets in the world (according to me)

Including this amazing bit of kit (right) 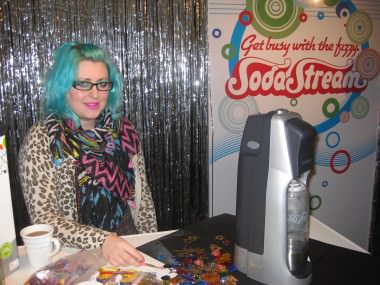 I don’t really write about gadgets for the simple reason that I’m often a good few years behind the rest of the world when it comes to them. Here’s what tends to happen: the planet somehow spins dramatically on its axis without crashing into the solar system and turning into a mad fireball, everyone’s getting really really rock hard in their underpants about the new iPhone 5000, I’m in another room staring in bewilderment at a TV remote control wondering when everything went all fucking Star Trek. I’m a very simple, analogue kind of guy with shoes and a watch and a second hand jacket on, and yet even I’m catching up with things now. I do a weekly podcast, I have an iPhone, I’m writing this on a laptop, I use an electric chunk of plastic that allows me into the block of flats where I live. Me, a simple man, I know a thing or two about gadgets, hence I’m going to list my nine faves in no particular order (not including the laptop I’m writing this on – MacBook Pro thanks for arksing)…

My record player
I only buy vinyl – not because I’m some hipster doofus, although I am that, but because when I were a lad back during the Regency Years we’d all sit around in frock coats eating game pie and talking about the latest LP records because CDs and downloads weren’t invented yet. As time went on I had trouble adapting to these newfangled ways of acquiring music so I’ve stuck defiantly to my method like a stubborn old lady who chained herself to a fence to stop a massive Starbucks being built on a field of really sexy cows. That’s why I love my record player, plus without it I’d be dancing around my kitchen to complete silence.

Sky HD Box
I don’t want to go on about the olden days too much, but there was a time when there were only four channels, TV used to STOP for the evening, and you’d literally be forced to spend hours of the day looking out of the window or reading books or listening to a continuous bleep and staring brainlessly at a picture of a girl with a clown while you waited for The Monkees, or The Munsters, or Monkey Magic or anything else starting with an M to hit the schedules. Now I can just get home, ignore whoever might be in my living room, and fill my hours before bedtime with a Location Location Location Location Location Location Location Location marathon. Sweet.

Multi-region DVD player
Not bragging or anything, but I’ve got a few contacts who tip me off about amazing TV shows before they’ve managed to make their way onto Channel 5 at 1am on a Wednesday, so I like to do my DVD shopping overseas (via Ebay). That means none of this Region 2 bullshit for me, I’m all about Region 1. That’s why I need my MULTI-REGION DVD player, it helps me watch Parks and Recreation SERIES 4 and Party Down and Freaks and Geeks and other cool stuff that makes me sound all groovy and in the know.

iPhone 4s
Hey girls, check it out – I’ve got an iPhone 4s, that’s iPhone that means “information phone” and 4s that stands for “4sexy”. It’s for VIPs only. Or anyone else who wants one. I don’t know. Sure thing it’s a couple of models back but you know what they say about old models sometimes being better than new models… or about things being vintage, or old dogs and new tricks? Yeah I’m pretty hot property right now. Just don’t try to Facetime me unless you want to see a confused man crying incoherently and not knowing what the hell is going on. WHY ARE YOU LOOKING AT ME?? HOW DID YOU GET THERE?? WHAT IS THIS??

A SodaStream
A couple of years ago I realised that my thirst for sparkling water was getting absolutely preposterous and at this rate it was going to drive me to bankruptcy, so rather than take out a huge loan to fund my Perrier habit I cleverly invested in a SodaStream instead. It’s improved my life no end, I have fizzy water on tap, I haven’t tasted boring still water for YEARS, and I now dream of one day lolling in a tub full of hot fizzy bath water sipping on a mug of sparkling hot choc. One step at a time. Quick question though, how the hell do they get the bubbles in there? The mind literally boggles, on the assumption that boggles means wonders slightly.

My filter coffee machine
Don’t laugh but I’ve been caffeine free for a few years now on account of going into a manic state of insanity if I ever did more than one cuppa in a sitting, yet I’ll still happily chuck back a load of decaffs like nobody’s business. I’m complicated like that, don’t try and figure me out. Anyway I love my coffee machine for numerous reasons, but mainly because it makes my flat smell of nice things like decaffeinated coffee instead of horrible things like sweat from my balls or sweat from my face or sweat from a woman’s boobs.

Toasters
So it goes that back in prehistoric times someone accidentally dropped a bit of sliced bread in between two smoldering rocks, and then it popped up three minutes later perfectly toasted and tasting delicious. What followed was an exercise in science and innovation that I couldn’t even fathom let alone go into in any detail, but it resulted in the birth of the toaster, which might be the greatest food invention of all time apart from ovens, fridges, freezers, SodaStreams, ice cream makers, barbecues, microwaves and kettles. It’s certainly up there. Lots of you are probably wondering what I like to have on my toast and I’ll tell you – Marmite.

Super Nintendo
Wherever I go at the moment, whether it be to loiter around a water dispensing machine at work or if it’s to a local gym to stand naked in front of a mirror covered in baby oil all I ever hear is Grand Theft Auto Five this and Grand Theft Auto Five that. XBox 360 they shout, IT’S AMAZING yada yada yada. Well not for me it’s not I’m afraid, as far as I’m concerned the gaming world starts and ends with Mario Kart on the SNES.

A microwave
Want a quick meal that tastes marginally less nice than other meals but is very very convenient if you’re in a rush? PING! Here you go. Fucking hell. Did anyone else’s brain just shout WHAAAAAAAT and then explode?

9 Valuable lessons learned from Breaking Bad
A handful of reasons why I like Autumn.