Okay so here I am saying a few things about FEMINISM

Also, this is me as a woman 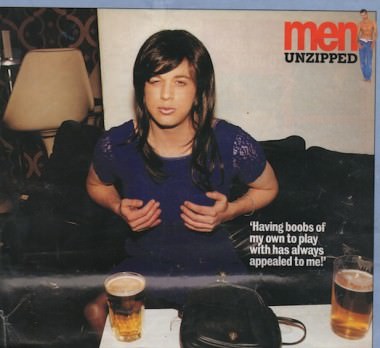 Let’s set my stall out early on just to be really clear. I’m the polar opposite of a misogynist, most days I manage to interact and talk with women without devaluing them in any way. I can enjoy the company of women without having to nip off for a quick wank or without suddenly going in for a snog during a gap in the conversation. I would even say I’m a feminist, but I’m not going to because firstly I don’t particularly like it when blokes say that – it comes off like they’re trying to score points and I’m not – and secondly the world that I live in has long been a place where the idea of women being intellectually or socially or mentally or financially or sexually inferior to men is completely ridiculous. You don’t need me to be a feminist. Granted that could be because I’m one of those middle class glasses and beard wearing dicks who work in the media, it could be because most of my bosses during my adult life have been women, it could also be because the strong effect that women have had on me stretches back to when I was a baby and my mum ruled the roost at home, and then when I went to school for the first time and was taught by nuns, and then during my teen years when my big sister and all her mates seemed really cool, much cooler than guys.

I don’t know. I’m probably a bit of an anomaly in a wider global sense, but certainly in the corner of youngish professional London that I inhabit the gender divide has long since been narrowed to non-existence, with many amongst me and my male friends content that our wives or girlfriends bring home most of the bacon each month (which in most cases they do), or fine if they choose to work and have us look after children in every which way but feeding them milk from our swollen knockers. The point I’m making is that hopefully in the not too distant future any notion of inequality between the sexes will evaporate across the entire nation, continent and then ultimately the planet. And the reason I’m making this particular point now is because feminism is high on the social agenda again thanks to campaigners like Caroline Criado-Perez, and great writers like Grace Dent and Caitlin Moran and a bunch of talented young journalists taking their first steps towards what will hopefully be successful and rewarding careers. But there’s a problem – every so often a strong message emerges from the sisterhood and it seems warped, mis-shapened, even a bit ill-conceived.

For example, when more! magazine (where I worked for a while back in the early 2000s, and ADORED) closed down a few months back there was a feminist roar of approval on Twitter chiefly from The Vagenda slamming any girl for working in that kind of catty environment anyway, which was a curious way to welcome the mass culling of decent jobs for female (and male) writers and designers. And then this week The Vagenda again kicked up a storm on Twitter because a very funny and entertaining male writer who isn’t me had written a piece on a women’s website about how much guys enjoy the summertime because girls wear less clothes and that’s great, because lots of girls are attractive. I read the piece just once, enjoyed it, and now it’s been removed from the site which hosted it after a sudden uprising and cries of sleaziness and misogyny. I found that odd because from what I could tell the writer was painting men as fairly mindless innocents suddenly at the mercy of female sexuality, not arch masturbators drooling over defenceless girls. That may be overintelectualising a light-hearted tongue-in-cheek piece but that was the gist. And it struck me that there is a huge gulf between women being devalued and objectified and women being found attractive because some of them are really beautiful – much in the same way that some men are.

I’ve always been of the opinion, and I touched on this in another recent piece, that to be prejudice you have to actually BE PREJUDICE. It is possible to look at women, to find them attractive physically, and to still respect them mentally, acknowledging that there are fixed boundaries that you won’t cross, while simultaneously appreciating all of the other rich ingredients that make them up as people. I’m fairly certain that the vast majority of modern males successfully navigate these waters most days of their lives until they die. Women likewise have to navigate them when they come across men who appeal to them physically too. It’s perfectly normal. It’s also very possible to not feel sexually attracted to another person but to still enjoy and value them for other reasons. I’m not here to defend anyone, I’m just saying that before crying MISOGYNIST sometimes you need to scratch beneath the surface first and figure out whether the right people are being attacked. A man finding beautiful women attractive is not the greatest insult to a gender.

The 10 greatest CHEESES you will ever eat in your LIFE
As another year turns, here’s 10 NEW things I know