You should totally go to Thorpe Park SERIOUSLY!

That’s ME on a roller coaster for heaven’s sake! 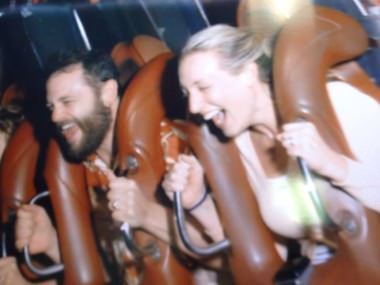 Okay so a little while ago I got an email from some kindly people to do with Thorpe Park offering me the chance to go to Thorpe Park in return for saying a few words about the place. It’s standard practice in this line of business, that’s why you get to read film reviews or restaurant reviews or art gallery reviews – those journalists didn’t just wander in off the street on a whim and suddenly get inspired to write something poetic or mean, the whole thing was contrived, sometimes people might be doing favours for friends, you just don’t know. But here’s the thing, I was offered tickets to go and try out an amusement park, I’d never been to an amusement park before on account of not being from the kind of family that finds those sort of places funny, and I really really wanted to go to one. I’m a blank canvas, a clean slate, I was going along with my only prior knowledge of Thorpe Park coming from an episode of The Inbetweeners that I’d half-watched once. I’d never even been on a roller coaster before. So with that in mind, and without any advertorial fluff to spoil your enjoyment, here’s my genuine thoughts and feelings about the Saturday afternoon I spent wandering around an amusement park with my wife, my godson and my godson’s parents:

1. Thorpe Park looks genuinely brilliant – Like I say, I had an untainted mind, I was a stark landscape, an empty vessel, a balloon with no air in it, two bits of bread with no filling in the middle, a hollow shell, a clown with no make up. Other stuff that I could list in this already over-stated metaphor about never having been to that kind of thing before. I didn’t know what I was walking into. I’d been to the odd funfair before but those just involved bits of steel clanging together forming rickety old deathtraps operated by men who looked like they’d definitely done time. This place was like a spectacular film set in comparison. There were some constructions that I thought were so genuinely beautiful I just wanted to stand back and applaud them and I say that without even an ounce of irony.

2. The music they play is excellent – As you can probably imagine the weekend seems to attract gangs of teens with their trousers hanging down to the always-fashionable mid-arse point for boys, or munching up to it for girls, plus there was an array of fresh inkwork to show off. Nothing wrong with that, it’s what the kids do. One of them had the word AMERICA scrawled on his neck. But I was really pleasantly surprised by the sounds of Chuck Berry and Little Richard theme-tuning the whole place rather than Rihanna or Rizzle Kicks or one of those Rita Ora or Katy Perry things. It created a nice vibe. If there’s one thing I’m a big fan of it’s nice vibes. Seriously ask anyone, they’ll tell you. Josh: likes nice vibes.

3. Be prepared to queue and to not have the greatest lunch of all time – I wish the report could be entirely glowing, but that would be disingenuous and I don’t like to be disingenuous even when I’ve been given a massive freebie. Lunch wasn’t great and the options weren’t hugely inspiring – I ended up barging 10-year-olds out of my way at a pizza buffet – but I’m also very aware that it’s an amusement park not Brixton Village so I should probably stub out my pipe and get over myself. Also at the weekends the lines for rides can stretch on for over an hour at a time which is no fun for anyone – you might be wise to take along a nice book by whichever incarnation of JK Rowling is your favourite or prepare some interesting conversation topics beforehand. The clever punter probably knows to get there early in the morning or goes on a weekday. With that in mind I’m preparing another trip where I intend to arrive at the park at around 7am on a Tuesday morning to ride everything completely topless and free spirited. The roller coasters are that good, which leads seamlessly to me saying that…

4. THE RIDES ARE REALLY REALLY AMAZING – I went on a couple of roller coasters and then a thing where you’re in a log floating along a river before everything suddenly goes completely berserk and you start whooping and screaming and crying hysterically with wild uninhibited joy like you’re a teenage girl and you’ve just seen a tree that looked a bit like Harry from One Direction, or you’re that same girl and you thought you saw Prince Harry coming out of a shop, or you’re still that girl and you met a guy called Harry at a party and you ABSOLUTELY LOVE THE NAME HARRY, or you’re that girl and you’ve just enjoy the Clint Eastwood renegade cop classic Dirty Harry for the first time. I have no idea where this is going except to say I discovered a vivid lust for danger and adrenaline that I never knew I had. My conclusion being that roller coasters are great great fun.

In short, you should go. I’m definitely going again. Let’s all go to Thorpe Park!

If this were the kind of website where we do that kind of thing I’d give it four roller coasters out of five. But it’s not. 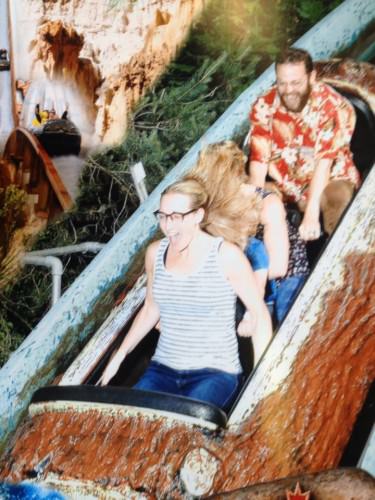 And here’s a link to the Thorpe Park website.