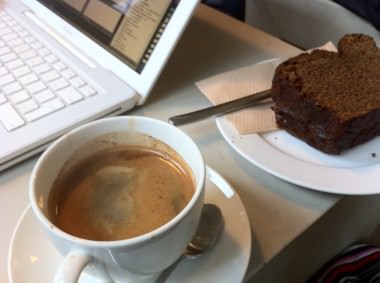 It was probably someone like Jane Austin or Charlotte Bronte or Emily Bronte or their brother Richard Bronte or the science fiction writer and all round great human being Kurt Vonnegut who once said “write what you know”. “Write what you know”. For a third time I’m going to repeat the words “write what you know” for emphasis. It’s an old soothsaying technique that gives the sentence extra gravitas. Anyway whoever it was who first said that had a really good point and as a result I’ve spent years repeatedly writing about what kind of vegetables are my favourite and telling everyone about what music I enjoy listening to when I’m chilling out in a hammock or just cooling on a swing with my homegirls. Today I thought I’d mix things up by digging deep into my conscious self to bare my soul about life as a freelance writer. I’ve been one for over ten years now, I consider myself quite an expert, so for any aspiring freelancers out there or anyone who might be bored and looking for something to read, or for people who stumbled across this site by accident (hi guys!) here’s a list of insights, hints and statements of fact about life as a freelance writer…

It’s not all cappuccinos and rustic lunches with your mates – In my mind’s eye I’d always pictured freelancers sitting around in cafes wearing berets and turtle necks comparing their latest works and eating slices of salami from a wooden board, but then I realised that I’d made the very common mistake of muddling freelancers with bog standard French people. I know, I know – I was gutted too. The truth is that you tend to have a cheese sandwich in the lounge on your own at around 1pm, and when you’ve polished it off you mumble “right back to work” to yourself and go back to work. My advice would be to have the radio on, so as to create the illusion of not being completely alone. Or invite some tramps in for a features meeting slash think tank.

Not many editors want to hear your self indulgent bullshit, so why not set up a blog! – You’ve all seen Sex and The City or that great new US sitcom Girls. In both cases the female leads sit around writing stuff like “so there I was sitting in a cafe eating salami with some French guys and it struck me – LOVE SUCKS!” or “how can I ever be me if I don’t even know who me is?” and it was around the 88th or 92nd time that an editor burst out laughing after I’d pitched a weekly column all about ME and my hilarious life that I realised they weren’t laughing with me. I had a completely straight face. So I set up a blog instead. Who’s laughing now guys??… guys?… guys, you missed it, I said WHO’S LAUGHING NOW??

When you get a commission, make sure you celebrate – When you go freelance your bank statements turn from simplistic recorder standards to scrawled sheet music for mostly improvised jazz numbers – fucking hell I’m good at imagery. Hire me, you idiots! Seriously, I just made that last sentence up FROM MY MIND. Anyway, my point being that the work won’t always come in so when it does don’t be all coy, go wild. Turn the radio up, knock back half a glass of milk, shout something out of the window about how happy you are. Then get your head down and make that shit count, you don’t want this to be your last ever commission.

You’re not strictly FREE and there’s a distinct absence of LANCE – Again, when people think about freelancing they tend to see it as an open road. You’re your own boss, there’s no one to answer to. You’re made in the shade! Actually you’re pretty much the exact opposite of made in the shade, because suddenly EVERYONE is your boss. In fact the only person who isn’t your boss is you. Plus, disturbingly, no one knows where the ‘lance’ bit comes from. It might be medieval, it might not be medieval, as I’ve literally just pointed out no one knows where it comes from.

Don’t spend it all at once – When I first went freelance back during the First World War I’d get two shillings and six for every essay I submitted to Distinguished Gentleman or Beautiful Woman Magazine, but while I might have felt like a millionaire I knew that if Mr Hitler weren’t going to get his hands on it, the bloody tax man would. This is all just a hilarious and historical way of saying that you need to do your own taxes.

Offices turn into weird prisons – I find it nice and good for the noggin to spend at least a couple of days a week working in an office. That way you get to interact with other people, learn their mannerisms, their language, ape their ways of communicating with each other, you get to see what the latest fashions are, you get a taste for how people like their tea, or what sort of street food they’re feasting on at lunchtime these days, you get to talk about the latest television serials, the best tape cassettes to put in your iPod, you get to stand next to water coolers enjoying lovely conversations with all of your friends, or you get to look out of the window and watch as a builder takes his trousers off and downs a full can of Diet Coke whilst dying inside because he feels like a whore. It’s a great way of staying in touch with what I like to call ‘society’. But do that for five days in a row? Are you fucking KIDDING ME!

I genuinely wouldn’t have it any other way – Chances are I have less money than you, when I think about the future I have no idea how the landscape’s going to look, some days I get stonewalled and can’t get any work, other days it comes flooding in and I don’t know if I’ll get it all done. I have draws full of old receipts, when I’m socialising with new people sometimes I don’t know how to describe whatever it is that I do. But seriously (removes red nose and cartoon wig) it’s probably the best job in the world. Except for condom tester which isn’t even a real job. Plus I have a wife so that’s not even funny.

7 Thing that are better than SEX! (according to Simeon)
You should totally go to Thorpe Park SERIOUSLY!

2 Responses to 8 SHOCKING TRUTHS about freelancing