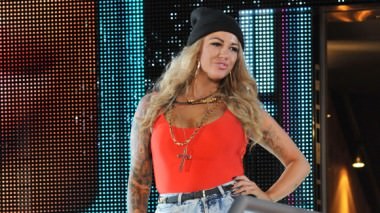 Far be it for anyone to ever take advice from me. I’m a fairly unsuccessful writer in his late 30s, I don’t have much money, my mortgage is only for a third of a small two bedroom flat, and at this exact moment in time either my feet stink or I should close the lid of the kitchen bin. I don’t know. Something smells. BUT nothing will ever be quite as PUTRID as last Friday night – NICE SEGUE JOSH! (pause for applause) – when I watched two shows on television that were supposed to fill my soul with joy but instead they tore my beating heart out and made me weep for everyone in their early-mid 20s and below. I fell to my knees, I ripped my oversized white linen shirt open while thunder boomed and rain lashed down on my craggy 30-something face that used to be so smooth and boyish. “WHAT HAVE YOU DONE ZUCKERBERG? WHAT HAVE YOU CREATED TWITTER? LENNON! LENIN! WHICHEVER WAS NEAREST TO BEING RIGHT ABOUT HOW THINGS SHOULD BE – WE’RE SORRY! WE’RE ALL SORRY!!” I may have been overreacting a touch, but I had drunk three full cans of Carlsberg. I was letting things get to me.

The first show was the Big Brother eviction show, and the second was Smells Like Friday Night which I was hoping would be an extravaganza of music and witty conversation on Channel 4. Let’s start with Big Brother. I’m normally a fan of Big Brother in a completely non-ironic way which can be hard to fathom for the majority of bearded pipe smoking snobs like me who normally deride things that are remotely popular. But I watched with a genuinely heavy heart at around 10pm as a ‘feisty’ glamour girl covered in tatts strode from the house flipping a double-bird and shouting FUCK OFF I’M JUST BEING ME! at anyone who would listen. “But what if you is horrible?” I whispered to myself with tears erupting from both eyes and a bubble of fresh snot inflating and deflating from one of my nostrils like something you might see in a hospital in a science fiction film. “Why do you refuse to change?” I opened another Carlsberg. I needed it. They showed her ‘best bits’ which generally involved either her bosoms or her crying because her hair looked wrong or her telling someone that she hated them but it was okay because she was letting them know in person. She made me sad because she was mistaking being genuine with being nasty. I wanted to tell her that sometimes it’s okay not to say mean things to people’s faces even if you think them. I also wanted to ask her to stop getting tattoos but that’s only because I’m a confused old biddy who can’t understand why young great looking kids have ventured their inkwork away from the decent privacy areas and safe zones (top of arm, belly buttom, upper groin, inner lip) and into the public domain like their forearms, necks, collar bones and tits. I may be imagining things but she seemed to have a great big bird of prey flying out of her vagina.

And then came the second show – Smells Like Friday Night. I was obviously still trembling and confused from the goings-down on Channel 5, but this was a music and chat show. This was safe ground, following in a fine tradition stemming from the beginnings of time with Top Of The Pops, The Old Grey Whistle Test, The Tube, The Word, TFI Friday, Popworld. If anyone’s wondering, which I suspect you all are, my dream pop show would be a combination of classic Dick Cavett Shows from the 1970s and the aforementioned Old Grey Whistle Test, but that’s because I’m entering a gentle phase of life where I like things to meander along non-threateningly. God I’m pretentious.

Anyway, a few Carlsbergs in, my pulse rate still above usual, I decided to go almost horizontal on the sofa in preparation for this familiar old beast with a different name. They’d have the lot, I said to myself stroking one side of my face with my hand because I was alone, the current hit makers doing their thing live, a rowdy but respectful crowd, a slightly uncool ringmaster keeping everything together like Terry Christian or Jools Holland or Simon Amstel or Chris Evans. They will probably have a droll female presenter sharing top billing, like Paula Yates or Miquita Oliver or Dani Behr or Alexa Chung. And they did have both of those people in the form of the comedian and Interestment Presents… Get Up Stand Up alumni Rob Beckett and a Vice journalist called Billie JD Porter, but for some reason they’d paired them up with the stage school hip hop duo Rizzle Kicks who oscillated between pretending to be stoned and shouting stuff like I LOVE GETTING PISSED! or SHE’S GOT LOADS OF TWITTER FOLLOWERS or FUCKING HELL MAN! or I BET YOU’RE A FEMINIST! or YOU’RE WELL FIT! seemingly at random during interviews.

By the end of the show I was in such deep existential despair that I’ve taken it upon myself to write a handy list of rules for anyone under 30 who has stumbled across this site completely by accident (hey dudes!). Welcome. And please remember, I’m doing this because I love you… (and also because you scare me)

1. Okay, let’s break it down like this – you are NEVER a brand, you are ALWAYS a person. Other people are also persons, not brands, you have that in common with them. Tap into the part of you that’s just a person. You don’t have to sell yourself constantly.

2. Twitter and Facebook are great fun and everything but they don’t define who you are. If someone has legions of followers it doesn’t guarantee they’re a great guy/gal. Look at me, I’m 36 or 37, I’ve got barely any followers and I’m still an absolutely amazing bloke. We should have a beer one evening. So long as it’s not before Thursday or preferably on a Friday. Although I can only have a quick one. The bloody wife etc etc blah blah… Actually you know what, forget it.

4. “I’m not going to change for anyone” That will exactly happen, you will change for someone. Embrace change, change isn’t bad. It can do things like improve you and make you better and nicer. I once thought I wouldn’t change but now if I met old me it’d be the equivalent of a Frenchman meeting a completely different Frenchman.

5. Stop getting tattoos on your faces and necks and hands. And try not to smoke too much, and stay away from drugs, and stop dancing like lapdancers, and don’t talk to strangers they’re just rapists or murderers you haven’t met yet, and don’t watch pornography because sex should be silent and awkward and finish with a handshake, and be aware of people around you it isn’t all about you although I know that in your head it is because I was probably the same when I was still young hip and relevant, and please please please please PLEASE just stop being so fucking young and cool….

Phew! Okay, any more for any more?

One Response to Hey younger people, stop being dicks! Here’s how…