A few words about the MasterChef finalists

Behold, some people who COOK! 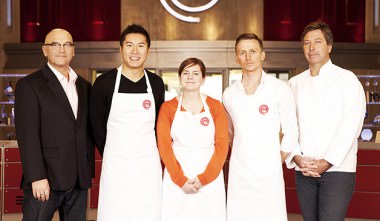 I’m going to miss the MasterChef final because I’m going on my own stag do to Berlin. I’m going to be eating big sausages, drinking strong lagers, doing robotronic dancing to Kraftwerk and eventually I’ll probably be crying in a strip club. While that’s happening, someone will be crowned MasterChef champion, and I won’t be there to see it. I’m not saying this is already ruining my potential enjoyment of my stag do, just that it’s making me look forward to it around 43 per cent less. I love MasterChef, I’ve got all their albums.

Okay, so my piece about the semi-finalists last week proved to be all over the shop. I dismissed Natalie as just some crazed dope smoker who’d accidentally entered a cooking competition while she was high on superskunk, but I couldn’t have been more wrong about that chick. She’s the one to beat. Gregg and John obviously have a soft spot for her, she cooks up mind boggling combinations like last night’s ice cream with a bit of Crunchie bar and some flowers all over it. Even pompous Italian artists struggled to disguise that they’d just had to suppress a mammoth ejaculation after the first bite. Her confidence is growing, and while girls aren’t in the habit of winning this show, neither are Welsh guys. It’s all to play for. She’s got her eye on the prize. He who dares wins. Just do it. Old Spice – the mark of a man. I have no idea where I’m going with this.

The other two finalists are Welsh, after Torrode and Wallace decided to give that kind Indian lady the boot despite her cooking up some really nice curries. Problem was Gregg just couldn’t get past the time she popped his onion bhaji in a white paper bag and gave it to him. A WHITE PAPER BAG?? ON MASTERCHEF?? That was doing his fucking head in for days. He could barely sleep. Was she taking the piss? She had to go, which is a shame because I love Indian food. I particularly enjoy a little known traditional dish called Chicken Jalfrezi (pronounced Jal-frey-zeeee). Try it with rice.

So to the Welsh guys. In one corner there’s Dale, who looks like the kind of guy who thinks impressing someone with a strong handshake is really really important. Then there’s Larkin who looks Chinese, but then speaks English in a mixture of Welsh, West Country, and a small spattering of posh. I think he’s a lawyer. He might not be though. I haven’t checked. Let’s assume he’s a lawyer. And while we’re at it let’s assume that Dale spends his time at work wearing a headset and occasionally shooting finger pistols at hot girls.

Food-wise Dale is consistently decent, but not particularly exciting. He makes bog standard stuff like meat with a swoosh of thick cauliflower milkshake and a potato. He also stands there and bursts into tears if you say anything at all about his cooking. My favourite moment of the entire series so far was when Torode and Wallace showered him with praise and he replied “that was close, I almost started crying for a second there”… then started crying. God I hope he doesn’t win.

And then there’s Larkin. I’ll be honest, I’m fucking livid with that guy at the moment. On his day he’s ridiculous, and I mean that in the way rappers do, like when something’s good. Early on he was cooking shit with bunsen burners, delivering his plates to the judges while still wearing safety goggles. Even taste buds that famously don’t have penises or vaginas were getting hard-ons and wide-ons. Then Marcus Wearing happened. Looking like every baddie in every single movie made in the 1980s, the most feared chef in the land marched into a room, sucked out the atmosphere with his horrible personality, and by the time he’d finished Dale was obviously inconsolable and Larkin was a shadow of himself. In every round since he’s basically come third when he should be winning this thing.

So that’s where we are. Three finalists, only one winner. At the moment it’s Natalie, but I want it to be Larkin.

That means Dale will win.

Seriously though, I don’t know who’s going to win.